Benedict XVI has moved back to the Vatican opening an uncertain era in Catholic Church history where an "emeritus pope" and a ruling pontiff will live as neighbours for the first time.

Benedict, the first pope to abdicate in 600 years, will live out his retirement in a restored convent in the Vatican gardens.

The property has a view of the dome of St Peter's Basilica and is just a short walk from the residence of his successor, Francis.

Benedict, 86 and in frail health, arrived by helicopter from Castel Gandolfo, the papal summer residence south of Rome, where he had been staying while the convent was being restored.

Pope Francis, 76, was due to greet Benedict later in front of the convent, the first time they have met since 23 March.

The small building includes a chapel, a library for the former theology professor, quarters for his aides and a guest room for his older brother, Georg, a monsignor.

While the presence of a reigning pope and a former one is a new situation, experts say it would only cause difficulties if Benedict tried to influence Pope Francis's decisions, something he has promised not to do.

Shortly before his resignation, Benedict said he would be "withdrawing into prayer" and would live out his remaining days "hidden from the world".

Still, some Church scholars say that in the event that Francis undoes some of Benedict's policies while he is still alive, the former pope could become a lightning rod for conservatives and polarise the Church. 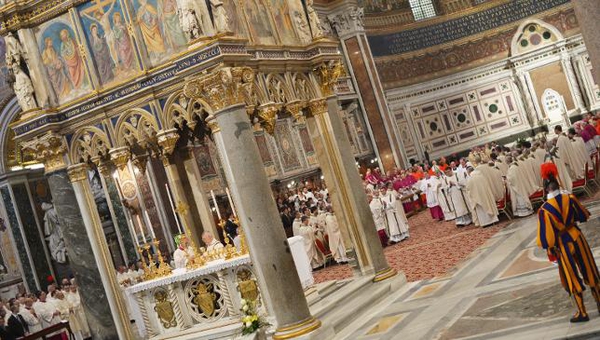