Donald Trump has said he thinks the United States is at the "lowest point it has ever been at".

The former US President, 75, was speaking during a wide-ranging interview with former Brexit Party leader Nigel Farage on the GB News channel.

Asked if it was a mistake to hold a rally on 6 January - the day the riots at the US Capitol took place - Mr Trump said the "real insurrection took place" on election day, 3 November 2020.

Mr Trump said he was predicting a "very big" year in 2022 and "an even bigger" 2024 as he said he will be back out on the campaign trail in the US.

The former Republican leader said he getting "the biggest crowds I've ever had" at rallies but did not explicitly say whether or not he would run for election in 2024.

Asked if it was a mistake to hold a rally on 6 January - the day the riots at the US Capitol took place - Mr Trump said: "Well, you know, I didn't have, that was a rally that was there, and if you look, it was a massive rally with hundreds and hundreds of thousands of people.

"And the 6 January was a protest. But if you would have looked at the crowd, the size, nobody wants to talk about that.

"I believe it was the biggest and most people, and I've spoken to very big crowds, I have never spoken in front of a crowd that size. Nobody ever tells you about that.

Mr Trump said police in Washington DC were given "some very bad instructions" on 6 January.

He told Mr Farage on GB News: "Also, as you know, the police, I guess they say, were not given proper instructions by Capitol Hill, which is Pelosi, they were given some very bad instructions.

"But to me, the real insurrection, if you look at it, took place on election day."

Asked by Mr Farage why he would want to go back into the "hell" of politics, Mr Trump said: "So I love our country. I brought the country to a level it's never seen before.

"Then we had Covid come in, and then I brought it back, came up with vaccines that you're using, we're all using, the world is using, saved tens of millions of people throughout the world, in less than nine months.

"It was supposed to take 12 years. I just heard the other day they were expecting it to take 12 years, and everyone said it wasn't going to work, and they work incredibly well.

"We've done an amazing job. If you love the country you have no choice, it's not a question. It's just... this is a wonderful, beautiful life. But I like that too, because I was helping people. 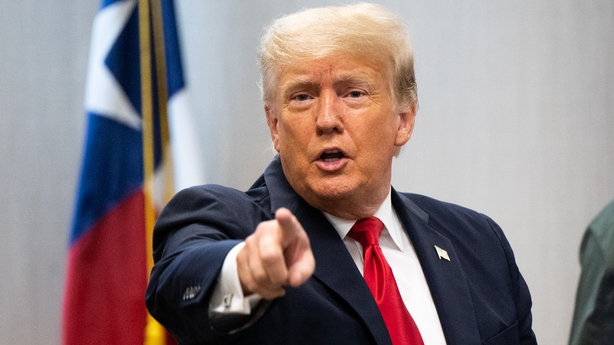 Mr Farage appeared to suggest he could not ask a particular question because it would "start the campaign clock ticking".

He then said to Mr Trump: "But we've got the mid-terms coming up in less than a year. Are you going to be out on the campaign trail?"

"And those two losses were actually by people that were - the people that won were more Trump than I was, OK? So, they won.

"But what happened is, what's happening is, everybody wants the endorsements, it's become very important, the most important and the most powerful endorsement that our country has seen.

"So, I have an obligation to make sure the right people get in. And we have many, many people online. Actually, when I leave here, right now, I've got four candidates that want an endorsement.

Asked about what he makes of promises to achieve a net zero target on greenhouse gases, Donald Trump told GB News: "I think the carbon taxes that they want to put on countries and people and companies, I think it's ridiculous.

"And look, we have in our case, liquid gold (oil). They're taking it away from us by not letting us use it. It's liquid gold. And natural gas is very clean. It works out very well."