US President Joe Biden has said the war in Yemen "has to end", pledging to stop US support for Saudi-led offensive operations and to halt arms sales.

"This war has to end," Mr Biden said in his first major foreign policy speech at the State Department in Washington.

"To underscore our commitment, we are ending all American support for offensive operations in the war in Yemen, including relevant arm sales."

Before the speech, National Security Advisor Jake Sullivan told reporters the president would make the announcement saying: "That's a promise he made in the campaign he will be following through on."

The end on US military support for the Saudi-led coalition fighting in Yemen reverses former president Donald Trump's policy of providing logistical assistance and selling huge amounts of advanced weaponry, such as precision-guided bombs.

Signalling Washington's new approach to the war, which has led to a humanitarian crisis, the Biden administration is also understood to be appointing a Yemen envoy, Timothy Lenderking.

Yemen's Iran-backed Houthi rebels have welcomed Mr Biden's plans, saying it is a step towards ending the long conflict.

"We hope this will be the beginning of a decision to stop the war on Yemen," senior Huthi political official Hamid Assem said.

"America's reputation has been tarnished by the killing of the people of Yemen," he added.

President Biden also said he had warned Russian President Vladimir Putin that the US will no longer be "rolling over in the face of Russia's aggressive actions."

"We will not hesitate to raise the cost on Russia and defend our vital interest and our people.

"I made it clear to President Putin in a manner very different from my predecessor that the days of the United States rolling over in the face of Russia's aggressive actions, interfering in our elections, cyber attacks, poisoning its citizens, are over," he said.

He is also set to freeze plans set in motion by Mr Trump to reduce the US troop presence in Germany, which has been a cornerstone of NATO security since the start of the Cold War.

Mr Biden also called on Myanmar's military to "relinquish power" and release the government officials and activists detained in this week's coup.

"There can be no doubt: in a democracy, force should never seek to overrule the will of the people or attempt to erase the outcome of a credible election," the president said.

"The Burmese military should relinquish power they have seized, release the advocates and activists and officials they have detained, lift the restrictions in telecommunications, and refrain from violence." 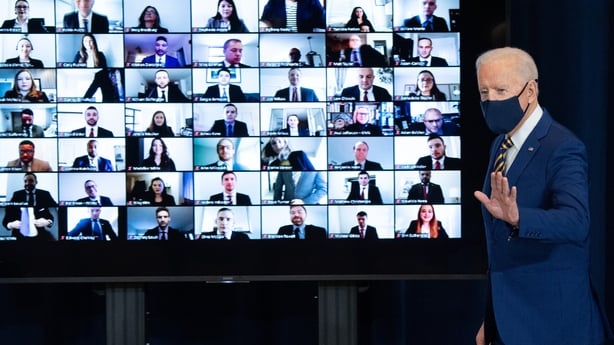 President Biden announced his intention to massively increase the cap on annual refugee admissions to the United States, which fell to a historical low under Mr Trump.

In line with a campaign promise, Mr Biden said he would set at 125,000 the cap on admissions as part of the country's refugee resettlement programme, against 15,000 for the current fiscal year.