US President Joe Biden called for "unity" and pledged to be a president for "all Americans" at his inauguration in Washington, but warned of the challenges ahead as he takes on multiple crises.

In his first speech as President, Mr Biden declared: "This is America's day, this is democracy's day. A day of history and hope."

But as the US confronts the deadly coronavirus and deep political divisions, he warned that to overcome its challenges will require "so much more than words, it will require the most elusive of all things in a democracy, unity".

He said: "Today on this January day, my whole soul is in this: bringing America together, uniting our people, uniting our nation, and I ask every American to join me in this cause.

"This is our historic moment of crisis and challenge and unity is the path forward. And we must meet this moment as the United States of America."

Read more:
Trump arrives home to Florida, says he'll 'be back in some form'
Joe Biden: A difficult road ahead to navigate
A look back at Biden's long journey to the White House
Politics, Power and Pandemic: The Donald Trump Legacy

Joe Biden says the rise of white supremacy and domestic terrorism in the US must be confronted.

"My whole soul is in this - bringing America together, uniting our people, uniting our nation," he says | https://t.co/PhIqa0n91w pic.twitter.com/MHmcnIWsxX

In the 21-minute speech President Biden laid out the challenges ahead.

"We need all our strength to ... persevere through this dark winter. We're entering what may be the toughest and deadliest period of the virus," he said, calling on Americans to "finally face this pandemic as one nation".

He said: "Here we stand just days after a riotous mob thought they could ... drive us from this sacred ground.

"It did not happen, it will never happen, not today, not tomorrow, not ever, not ever."

The United States faces "a rise of political extremism, white supremacy, domestic terrorism, that we must confront, and we will defeat", he said.

The new president called for the country to "reject the culture in which facts themselves are manipulated".

Mr Biden said the US faces "a rise of political extremism, white supremacy, domestic terrorism, that we must confront, and we will defeat". 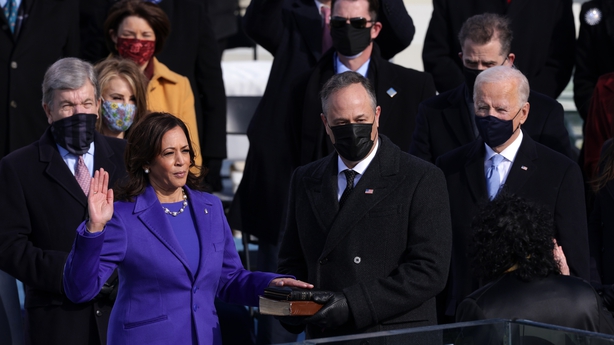 Putting his hand on a family Bible, President Biden repeated after Chief Justice John Roberts the presidential oath, that he will "preserve, protect and defend the Constitution of the United States".

"It's a new day in America," Mr Biden wrote on Twitter before the inauguration as, in a sign of his push for unity, he prayed alongside congressional leaders at a Catholic church.

Mr Biden, who at 78 is the oldest president in US history and only the second Catholic, took office amid enormous challenges with the still-raging Covid-19 pandemic having claimed 400,000 lives in the United States.

Ms Harris, the daughter of Indian and Jamaican immigrants, became the highest-ranking woman in US history and the first person of colour as the nation's number two.

She and her husband Doug Emhoff, America's first-ever "second gentleman", were escorted to the inauguration by Eugene Goodman, a police officer at the Capitol who lured a pro-Trump mob away from the Senate chambers in a video that went viral.

After the inauguration, President Biden and Vice-President Harris visited Arlington National Cemetery to pay their respects to US military war dead at the "Tomb of the Unknown Soldier."

The President was greeted by a 21-gun salute as he arrived at the cemetery on the outskirts of Washington.

Mr Biden then made his way to the White House in a presidential limousine with the license plate "46" flanked by six mask-wearing Secret Service agents before emerging to walk the final steps to the White House.

He walked with members of his family through streets that were eerily empty because of the coronavirus pandemic. 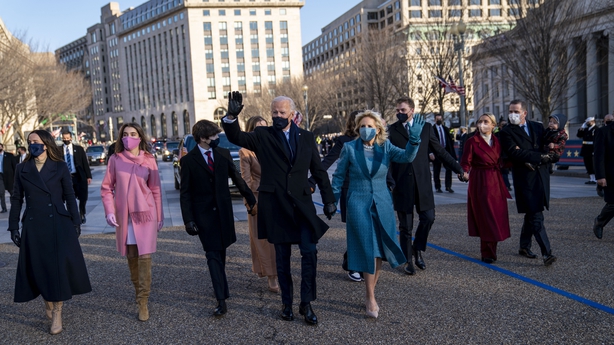 Under tight security, military bands and an escort of police motorcycles led the presidential motorcade to the White House down Pennsylvania Avenue.

At the White House, Mr Biden signed a raft of executive orders to launch his administration, including a decision to rejoin the Paris climate accord.

The orders were aimed at reversing decisions by Mr Trump reversing the process of leaving the World Health Organization, ending the ban on entries from mostly Muslim-majority countries, bolstering environmental protections and strengthening the fight against Covid-19.

He said: "We are going to combat climate change in a way we have not done so far."

For the first time in 152 years, the sitting president did not accompany his successor to the inauguration after Mr Trump for two months falsely alleged that fraud cost him a second term.

Several hours before the inauguration Mr Trump and his wife Melania walked a short red carpet on the White House lawn to the Marine One helicopter, which flew near the Capitol before heading to Andrews Air Force Base on Washington's outskirts.

"This has been an incredible four years," Mr Trump told several hundred cheering supporters in a campaign-style event before flying off for the last time in Air Force One en route to his Florida resort.

"We will be back in some form," vowed Mr Trump, who retains a hold on much of the Republican Party despite being the first president to be impeached twice.

He did not address Mr Biden by name but, in a rare hint of graciousness, wished the next administration "great luck and great success".

A spokesman said Mr Trump maintained one tradition by leaving a letter for President Biden, although the contents were unknown. 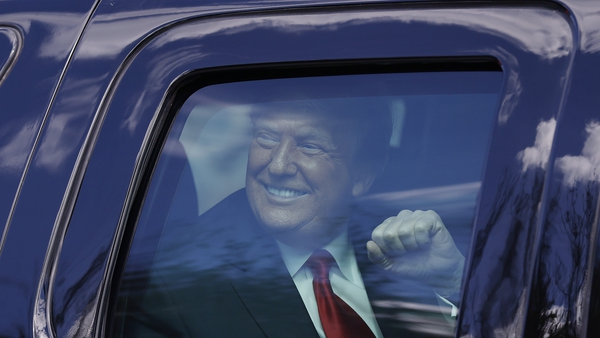 Trump arrives home to Florida, says he'll 'be back in some form'