Twelve National Guard troops have been withdrawn from duty in Washington ahead of Joe Biden's presidential inauguration ceremony.

Amid US media reports that two soldiers were excluded after being vetted for links to extremist groups, a Pentagon spokesperson said that not all 12 soldiers were withdrawn for that reason.

Citing a Defense Department official, CNN said it could not confirm whether such a link had been made to the two troops or whether a specific incident had provoked their expulsion ahead of Wednesday's events.

Washington has become a city in virtual lockdown in recent days, with concrete blockades, barbed wire and thousands of armed troops patrolling downtown streets after the violent assault on the Capitol by supporters of President Donald Trump on 6 January.

The FBI had announced it would be conducting background checks on the visiting National Guard troops to further identify potential security risks.

We "want to make sure that we have the right people in the security bubble," General William Walker, head of the National Guard in Washington, told Fox News on Monday.

All told, there will be up to 25,000 National Guard troops deployed in Washington, charged with protecting a mostly inaccessible "red zone" around the Capitol - where Mr Biden and Vice President-elect Kamala Harris will take their oaths of office - and the White House.

Meanwhile, Mr Biden bid an emotional farewell to his home state of Delaware today before heading to Washington on the eve of his inauguration.

"It's deeply personal that our journey to Washington starts here," Mr Biden said after rubbing one of his eyes while addressing dozens of guests at a National Guard base named in honor of his late son Beau.

"I only have one regret, that he's not here," he said, referring to Beau, who died of cancer in 2015. "Because we should be introducing him as president."

Joe Biden quotes James Joyce while giving an emotional farewell as he leaves his home state of Delaware for Washington DC, ahead of his inauguration as the 46th US President. pic.twitter.com/6DYbwyhAy5

Mr Biden will be sworn in as the 46th president of the United States at noon tomorrow, replacing Republican Donald Trump, whose chaotic four-year presidency left an American public bitterly divided.

The 78-year-old Democrat also addressed his own mortality, an unusual direction given he is about to take the helm of the most powerful nation in the world.

"Excuse the emotion," Mr Biden said, pausing on his words as he composed himself. "But when I die, Delaware will be written on my heart."

Mr Biden mentioned the history-making nature of the election, and how Kamala Harris, a black woman of South Asian descent, will be inaugurated as vice president 12 years after Biden took office as VP to Barack Obama, the nation's first black president.

"Don't tell me things can't change. They can, and they do," he said. "That's America. That's Delaware."

The incoming Biden administration has said it will not be easing Covid-19 restrictions on travel to the US from Ireland, the UK and parts of Europe, despite an order lifting the ban issued by Mr Trump.

In March last year, the US announced Covid-19 restrictions on travel from Ireland, the UK and parts of Europe.

Last night, Mr Trump said the ban would be lifted on 26 January, but minutes later Mr Biden's spokesperson Jen Psaki said the measure would not stand and now was not the time to ease the restrictions.

She said that in fact the new administration would be strengthening public health measures around international travel.

"With the pandemic worsening, and more contagious variants emerging around the world, this is not the time to be lifting restrictions on international travel", she added.

With the pandemic worsening, and more contagious variants emerging around the world, this is not the time to be lifting restrictions on international travel.

Mr Trump is expected to issue dozens of pardons and commutations today.

Following a deadly assault on the US Capitol on 6 January by his supporters, Mr Trump was impeached for the second time in just over a year - another first in a presidency of many firsts.

His final Gallup poll as president yesterday showed him exiting with 34% approval, his record low.

Mr Trump's overall average of 41% since taking office is also the lowest for any presidency's approval rating since Gallup began measuring in 1938.

According to US media, Mr Trump has a list of about 100 people he will grant clemency to.

After what The New York Times reports has been an intense lobbying effort, these are expected to be a mix of white-collar criminals and people whose cases have been championed by criminal justice activists.

First Lady Melania Trump released a farewell message yesterday as she prepares to leave the White House, saying that "violence is never the answer", two weeks after the president's supporters stormed the US Capitol.

In a formal, six-minute speech recorded on video, she made only a fleeting reference to her husband as she paid tribute to military families, pandemic health workers and those helping victims of opioid abuse.

"The past four years have been unforgettable," the First Lady said. "As Donald and I conclude our time in the White House, I think of all of the people I have taken home in my heart and their incredible stories of love, patriotism and determination.

"Be passionate in everything you do. But always remember that violence is never the answer, and will never be justified," she said.

"When I came to the White House, I reflected on the responsibility I have always felt as a mother to encourage, give strength and teach values of kindness."

Mr Biden's inaugural speech is expected to focus on his appeals for Americans to reunite and to take on the Covid-19 pandemic with new seriousness.

He is also set to announce a dramatic shift away from Trump's "America First" ideology, taking the United States back to its traditions of alliance-building.

This will begin with the new president ordering the United States back into the Paris Climate Accord on day one.

Mr Biden will take the oath of office on the steps of the Capitol under the protection of more than 20,000 National Guard soldiers. 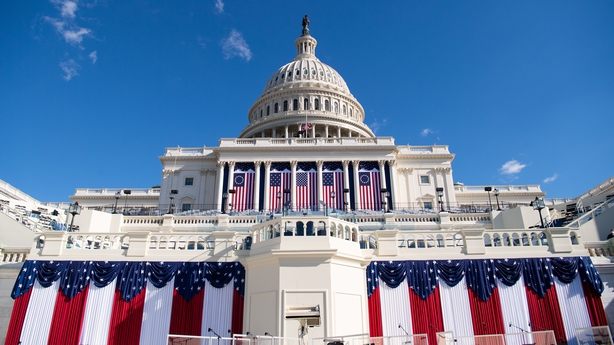 Checkpoints and large zones closed to ordinary citizens mean there will be only a smattering of guests.

Mr Trump, the first president to lose re-election since George HW Bush was replaced by Bill Clinton in the early 1990s, will also be the first ex-president to snub his successor's inauguration in a century-and-a-half.

Tomorrow, he will depart for Florida from the White House early, in order to benefit from full presidential travel privileges up to the last minute.

Marine One will take him from the White House to Joint Base Andrews to catch Air Force One - the presidential plane that, from noon local time tomorrow, will no longer be his to use.

According to a Bloomberg report, Mr Trump is organising a military sendoff for himself at Andrews, watched by a crowd of invitees.

There will be special coverage of the US Presidential Inauguration on RTÉ One at 3.50pm on Wednesday