US Democrats nominated Joe Biden as their 2020 presidential candidate, offering the Washington veteran as a "man of courage" who would sweep away the "chaos" of four years under Donald Trump.

Viewers tuning in to day two of the four-day Democratic National Convention saw presenters affirm Mr Biden's character and leadership while drawing a sharp contrast with Mr Trump's scrambling to remain in the White House after November's election.

In an unprecedented and elaborate roll call vote that took place entirely online due to the coronavirus pandemic, all 50 states and seven territories announced their vote tallies that cemented Mr Biden's role as the party flagbearer.

It was a diverse array of politicians, everyday Americans and even some of Mr Biden's erstwhile rivals who helped nominated the 77-year-old.

"Well thank you very, very much, from the bottom of my heart," Mr Biden said in a live video link.

"It means the world to me and my family," he added, reminding viewers he will deliver a formal acceptance speech tomorrow at the conclusion of the four-day jamboree. 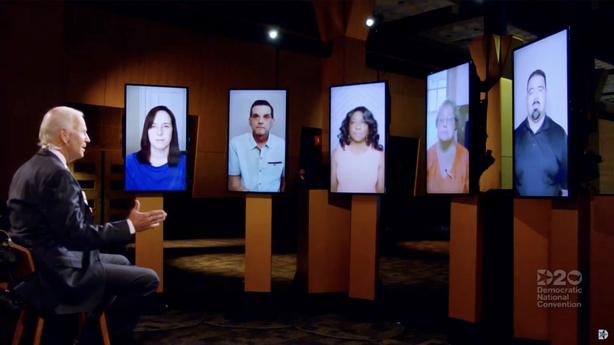 The nomination was a formality as he had already won the majority of the more than 3,900 delegates in June.

Yesterday's proceedings included a series of presentations by party leaders past and future who presented their own arguments against the White House incumbent and urged voters to rally around Mr Biden.

The lineup featured 95-year-old president Jimmy Carter, who served one term from 1977, and 1990s commander-in-chief Bill Clinton, who warned that the Trump White House is swirling with chaos instead of the competence necessary to address the nation's crises.

"At a time like this, the Oval Office should be a command centre. Instead, it's a storm centre. There's only chaos," Mr Clinton said.

"The buck never stops there."

The night's emotional underpinning was delivered by Jill Biden, who closed out the night with a compelling profile of the man she married in 1977.

She delivered a personal, high-stakes prime-time testimonial describing how the personal tragedy of the death of Mr Biden's first wife and daughter in a 1972 car crash has shaped him.

"How do you make a broken family whole?" she said. "The same way you make a nation whole. With love and understanding - and with small acts of compassion. With bravery. With unwavering faith."

Americans, she said, were "coming together" despite Mr Trump divisiveness.

"We have shown that the heart of this nation still beats with kindness and courage," she added. "That's the soul of America Joe Biden is fighting for now." 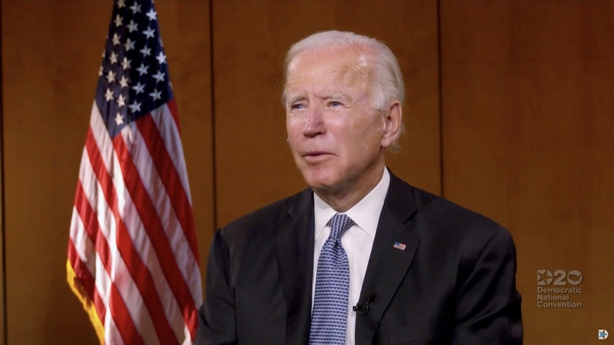 The president faced a barrage of criticism on opening night too, notably from former first lady Michelle Obama who said Mr Trump lacks the character and skills for the job.

"I thought it was a very divisive speech, extremely divisive," Mr Trump told reporters at the White House.

In her pre-taped remarks to the convention, Ms Obama urged Americans to rally behind Mr Biden, her husband's former vice president, in the 3 November presidential election.

"Donald Trump is the wrong president for our country," she said in unprecedented criticism of a sitting US president by a former first lady.

On a visit to battleground state Arizona, Mr Trump criticised her for delivering taped remarks.

"Thursday night I'm doing it live," Mr Trump said, referring to his speech next week when he formally accepts his party's nomination at the online Republican convention.

Mr Trump said he has chosen the White House South Lawn as the location - a controversial decision given that presidents are required to separate their campaigning from taxpayer-funded governing.

In its effort to appeal to middle-of-the-road voters and frustrated Republicans, the convention featured a video highlighting the unlikely friendship between Mr Biden and late Republican senator John McCain, narrated by his widow Cindy McCain.

The keynote was notable in that it featured 16 mostly young current and former elected Democrats seen as upcoming leaders including Stacey Abrams, who narrowly lost the Georgia governor's race in 2018.

"Faced with a president of cowardice, Joe Biden is a man of proven courage who will restore our moral compass by confronting our challenges, not by hiding from them or undermining our elections to keep his job," Ms Abrams said.