The death of Rayshard Brooks, a black man killed by a white police officer in Atlanta on Friday, was a homicide caused by gunshot wounds to the back, the Fulton County Medical Examiner's office said.

Mr Brooks' death reignited protests in Atlanta after days of worldwide demonstrations against racism and police brutality prompted by the death of George Floyd, an African American, in Minneapolis police custody on 25 May.

A post mortem examination carried out yesterday showed that Mr Brooks, 27, died from blood loss and organ injuries caused by two gunshot wounds, an investigator for the medical examiner said in a statement.

The manner of his death was homicide, the examiner said.

Mr Brooks' fatal encounter with police came after an employee of a Wendy's restaurant in Atlanta phoned authorities to say that someone had fallen asleep in his car in the restaurant's drive-through lane.

Caught on the officer's body camera and a surveillance camera, the encounter seemed friendly at first, as Mr Brooks cooperated with a sobriety test and talked about his daughter's birthday.

"I watched the interaction with Mr. Brooks and it broke my heart," Atlanta Mayor Keisha Lance Bottoms said on CNN. "This was not confrontational. This was a guy that you were rooting for."

But when an officer moved to arrest him, Mr Brooks struggled with him and another officer at the scene before breaking free and running across the car park with what appears to be a police Taser in his hand, a bystander's video showed.

A video from the restaurant's cameras shows Mr Brooks turning as he runs and possibly aiming the Taser at the pursuing officers before one of them fires his gun and Mr Brooks falls.

In the US, a police officer has been sacked following the fatal shooting of a black man in Atlanta. Rayshard Brooks, a 27-year-old father, was shot by police in the car park of a restaurant on Friday and later died in hospital. The killing has sparked fresh protests. pic.twitter.com/ss37eLSvnw

The officer who shot Mr Brooks was dismissed yesterday and identified by Atlanta police as Garrett Rolfe.

The second officer, Devin Brosnan, was placed on administrative duty, according to ABC News.

As demonstrators in Atlanta took to the streets and chanted for the officers in the case to be criminally charged, at one point late on Saturday blocking traffic on a nearby interstate highway, the Wendy's restaurant went up in flames.

Yesterday, police offered a $10,000 reward and published photos of what appeared to be a masked white woman being sought in connection with the case.

Lawyers for Mr Brooks' family said he was the father of a young daughter who was celebrating her birthday on Saturday.

They said the officers had no right to use deadly force even if he had fired the Taser, a non-lethal weapon, in their direction.

"(The victim) did not seem to present any kind of threat to anyone, and so the fact that it would escalate to his death just seems unreasonable," Mr Howard told CNN.

James Clyburn, an African-American member of Congress from South Carolina, said he was incensed by the killing.

"This did not call for lethal force. And I don't know what's in the culture that would make this guy do that. It has got to be the culture. It's got to be the system," he said, speaking on CNN's "State of the Union". 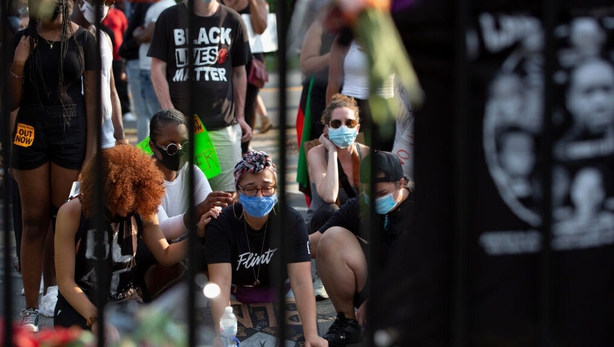 Mr Clyburn is among a number of politicians debating how to reform a judicial system seen by critics as stacked against poor and minority citizens and which has proved stubbornly resistant to change.

Some activists on the left have taken up "defund the police" as a rallying cry, one that US President Donald Trump has jumped on to use as a against his Democratic rival for the White House, Joe Biden.

Mr Biden, for his part, has tried to distance the party from the defund movement, instead advocating increased funding for community policing.

Ilhan Omar, a Somali-American congresswoman from Minnesota, called his proposal "ludicrous" and instead supported dismantling troubled police forces in places like Minneapolis, her hometown, and rebuilding them from the ground up.

"Nobody is going to defund the police," said Mr Clyburn, the third-ranking Democrat in the House of Representatives.

"The fact of the matter is, the police have a role to play," he said. "What we have got to do is make sure that their role is one that meets the times."