Police in the US state of Georgia have arrested two white men for the shooting death of an unarmed black jogger whose killing was captured in a video that went viral, sparking a huge public outcry.

Ahmaud Arbery, 25, was killed on 23 February as he ran on a sunny day in a residential neighbourhood in the town of Brunswick.

But the case gained national notoriety this week with the release of a 28-second mobile phone video that captured the shooting.

"Gregory & Travis McMichael have been arrested for the murder of Ahmaud Arbery," the Georgia Bureau of Investigation tweeted.

The two men were charged with murder and aggravated assault, according to a statement posted to the bureau's website. They have been booked into the Glynn County jail.

In the footage, Mr Arbery is seen running down a residential street and approaching a white pickup truck stopped in the right lane with a man standing in the back.

As Mr Arbery tries to get around the vehicle, he is confronted by a second man holding a shotgun. An altercation between the two ensues and the firing of three shots can be heard.

The two white men were identified by police as Travis McMichael, 34, and his father Gregory McMichael, 64, who both live in Brunswick.

According to the police report, Gregory McMichael told officers he thought Mr Arbery was a suspect in a series of area burglaries.

He said he went inside and got his .357 Magnum while his son grabbed a shotgun. When they finally caught up with Mr Arbery and Travis McMichael got out of the truck with the shotgun, Mr Arbery began to "violently attack" him, the father said, according to the police report.

The father said he saw his son shoot Mr Arbery who fell to the ground.

After the video footage went viral, a Georgia district attorney said on Tuesday that a grand jury would be formed to see if there were grounds to charge the father and son.

Georgia's governor, Brian Kemp, retweeted the Bureau of Investigation's arrest announcement late last night and added that the "investigation remains ongoing," while asking that residents call in with tips.

He also praised the bureau's director and agents "for their swift action," tweeting that "justice will be served." 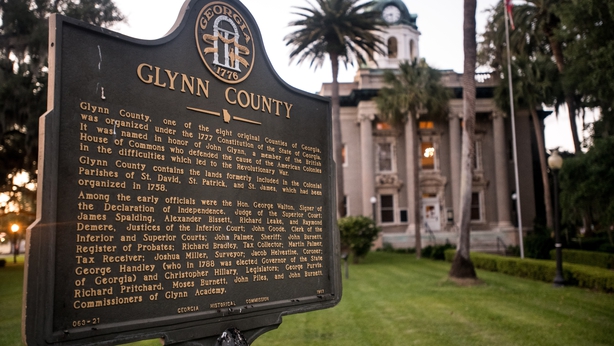 US President Donald Trump said he had not yet seen the video but that Mr Arbery's death was "a very sad thing."

"My heart goes out to the parents and to the loved ones of the young gentleman," Mr Trump said, adding he would get a full report of the situation later.

Around the country, political figures, celebrities and people on social media expressed fury.

"The video is clear: Ahmaud Arbery was killed in cold blood. My heart goes out to his family, who deserve justice and deserve it now," Democratic presidential hopeful Joe Biden tweeted on Wednesday night.

Stacey Abrams, a potential running mate with Mr Biden, hailed the arrest as an "important first step, but the first of many."

"We must not look away," she tweeted.

Some drew parallels between this case and the shooting death of another unarmed young black man, Trayvon Martin, by a neighborhood guard in Florida in 2012.