Voters in New Hampshire have headed to the polls in a critical Democratic primary as Bernie Sanders and Pete Buttigieg fight for the right to challenge US President Donald Trump in November's election.

They are each seeking to ignite the momentum to carry them to the Democratic nomination.

New Hampshire has a population of just 1.3 million people, yet it plays a hugely influential role in the US political landscape.

The northeastern state hosts America's first primary, eight days after Iowa kicked off the nomination process, and could narrow the Democratic field of 11 current candidates.

In a surprise, Michael Bloomberg won in Dixville Notch with one Republican and two Democratic votes, while Mr Buttigieg and Mr Sanders each earned one vote.

Mr Sanders (78) is a big favourite here as a senator from neighboring Vermont; four years ago he won New Hampshire by a landslide.

Mike Schowalter, a 39-year-old lawyer who normally supports small government and open markets, said this time he voted for Mr Sanders, who is proposing a health care overhaul.

"A lot of stuff going on in our country right now is a bit broken," said Mr Schowalter. "I think he'll get us talking."

Looming over the primary, Mr Trump jetted to New Hampshire yesterday evening aiming to steal the limelight with a large Manchester rally. 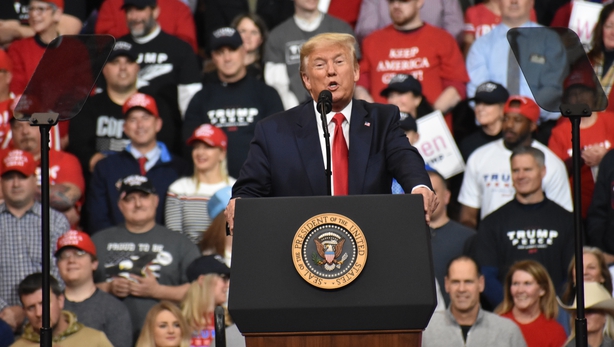 The remark appeared aimed at Mr Sanders, buoyed by a strong showing in Iowa last week and a poll that claimed he was the national frontrunner for the first time.

"New Hampshire, the choice you make today will shape our nation's future," tweeted Mr Buttigieg as polling began, depicting himself as a fresh new force that can lead a drive to beat Mr Trump

Complicating today's vote, independents - who outnumber both Democrats and Republicans in the state - can vote in either of those parties' primaries.

Read More:
US Democratic debate 2020: Sanders and Buttigieg face criticism
From virtual unknown to presidential hopeful - who is Pete Buttigieg?
How Joe Biden stumbled in Iowa

Firing up his supporters with promises to slash inequalities and overhaul the US healthcare system, Mr Sanders maintained a healthy lead in New Hampshire, where he won the 2016 primary by a landslide.

The RealClearPolitics polling average showed Mr Sanders at 28.8% in New Hampshire, tailed on 22.3% by Mr Buttigieg, whose Iowa win boosted his presidential bid.

A late surge also lifted the fortunes of Amy Klobuchar, with two new polls indicating the senator from Minnesota has jumped past Mr Biden and Elizabeth Warren to notch 14% support.

Calling it a "dramatic shift," a new Quinnipiac University poll showed Mr Sanders overtaking Mr Biden for the first time in the national nomination race, attracting 25% support against 17% for Mr Biden, who was shaken by a fourth-place finish in Iowa.

The increase suggest a possible upset when New York's former mayor throws himself fully into the race.

In a sign of the high stakes, the Democratic race has taken a bad-tempered turn in recent days with Mr Sanders and Mr Buttigieg trading barbs, and Mr Biden and Ms Klobuchar sharpening their attacks on both frontrunners.

"Unlike other campaigns, we don't have billionaires giving huge amounts of money," he said on Sunday.

Mr Buttigieg pushed back, quipping: "Well, Bernie's pretty rich, and I would happily accept a contribution from him."

As Mr Buttigieg has risen from practical anonymity, he has also faced intensifying criticism for his lack of national experience and supposed difficulty connecting with black voters, a key demographic.