Hurricane Dorian is confirmed to have killed at least five people in the Bahamas.

Prime Minister Hubert Minnis said as the storm stalled over the island chain, it unleashed catastrophic wind and rain.

Addressing a news conference at the National Emergency Management Agency in New Providence, Mr Minnis described the storm as an "historic tragedy" for the archipelago.

The second-strongest Atlantic storm on record, now packing maximum sustained winds of 270 kilometres per hour, was forecast to pound Grand Bahama Island through the day before veering northwest in the next day or so.

The hurricane was downgraded on Monday to Category 4 on the five-step Saffir-Simpson Wind Scale but is expected to move dangerously close to Florida's east coast tonight through Wednesday evening.

Prime Minister Minnis said "devastation is unprecedented" in the Abaco Islands, which on Sunday received the full brunt of Dorian as it came ashore as the most powerful storm ever to hit the archipelago.

Grand Bahama is still feeling the impact of the Category 5 #HuricaneDorian. Based on reports out of Abaco, the devastation is unprecedented. Winds have decreased to 165MPH but Dorian remains an extremely dangerous storm. Our focus right now is rescue, recovery and prayer.

"Thus far, the Royal Bahamas Police Force has confirmed that there are five deaths in Abaco," Mr Minnis said.

"Teams will go to Abaco as soon as possible for a full and proper assessment and identification," he added.

Residents posted images online of water rising up the side of their houses. The NHC warned of a possible storm surge that could push destructive waves higher than many roofs in the islands.

Video posted on the website of the Bahamian newspaper Tribune 242 showed water up to the roofs of wooden houses in what appeared to be a coastal town.

As of 8am (1pm Irish time), Dorian was stalled over the Grand Bahama Island barely drifting westward at 2kph, according to the NHC, which said a prolonged period of "catastrophic winds and storm surge" would affect the island today.

It was about 190km from the Florida coast, where residents said they were already experiencing strong winds and high surf.

Palm Beach County, the state's third most-populated county and home to US President Donald Trump's Mar-a-Lago resort, was among those with partial mandatory evacuations. Other counties announced voluntary evacuations.

"This looks like it could be larger than all of them," Mr Trump said during a briefing with the Federal Emergency Management Agency yesterday.

Cameras outside @Space_Station captured views yesterday of #HurricaneDorian. Extensive damage to buildings and communications networks is being caused by the hurricane as it passes over The Bahamas pic.twitter.com/bwhXxPKhBZ

Julia Eaddy, 70, in Titusville, about halfway up Florida's east coast, said she and her husband had ridden out several hurricanes before and were not fazed by the forecast.

"I think it will be more of the same," she said.

Several gasoline stations around Titusville were closed. Many grocery stores were open but boarded up. Inside, shelves emptied out fast.

More than 830,000 people were under evacuation orders in Charleston and other coastal communities in South Carolina, emergency management officials announced. Authorities said they would release more details during the day as the hurricane's path became clearer.

Dorian was tied with Gilbert (1988), Wilma (2005) and the1935 Labor Day hurricane for the second-strongest Atlantic hurricane on record, based on maximum sustained winds. Allen in1980 was the most powerful, with 306kph winds, the NHC said.

Although Dorian is expected to weaken gradually, forecasters said it likely would remain a powerful hurricane for the next couple of days 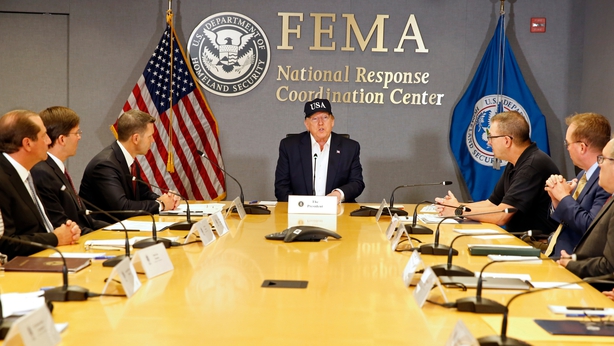 A new tropical storm formed southwest of Mexico yesterday and was expected to become a hurricane today, the NHC said.