US President Donald Trump has dismissed concerns over a protracted trade war with China.

China warned that the US decision to label it a currency manipulator would lead to chaos in financial markets.

Mr Trump, who announced last week that he would slap a 10% tariff on a further $300 billion in Chinese imports from 1 September, said investment was pouring into the US economy.

He also pledged to stand with American farmers in the face of Chinese retaliation.

China has halted US agricultural purchases and raised the prospect of additional tariffs on US farm products.

"Massive amounts of money from China and other parts of the world is pouring into the United States for reasons of safety, investment, and interest rates!" Mr Trump tweeted. "We are in a very strong position."

Ratcheting up the pressure on China, the US Treasury Department said in a statement yesterday that it had determined for the first time since 1994 that Beijing was manipulating its currency.

The move followed China's decision to let the yuan fall below the key seven-per-dollar level for the first time in more than a decade, rattling financial markets and dimming hopes for an end to a trade war that has dragged into a second year. 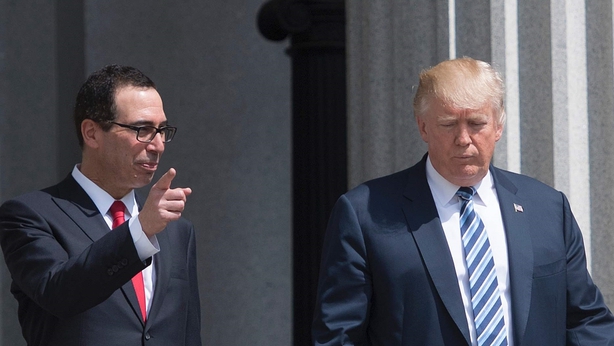 China "has not used and will not use the exchange rate as a tool to deal with trade disputes," the People's Bank of China said in the country's first official response to the latest US salvo.

The Trump administration wants to continue trade talks with China and is still planning to host a Chinese delegation for further talks in September, Larry Kudlow, director of the White House National Economic Council, told CNBC.

Mr Kudlow said movement toward an agreement could change the outlook for US tariffs, adding: "It takes two to tango".

He added that the US economy was still in good shape and said he saw no signs of a global recession on the horizon, despite growing concerns the US-China standoff is slowing manufacturing activity around the world.