Americans are facing a second - and equally scorching - day of hot weather, with daytime temperatures forecast to approach 38C (100F) across a number of major US cities.

An oppressive heat wave stretching from the Midwestern plains to the Atlantic coast had nearly 150 million people struggling to stay cool amid stifling temperatures yesterday.

"The temperatures we're seeing in our city today and tomorrow could be the highest we've seen in years. Take it seriously," New York Mayor Bill de Blasio said on Twitter.

The heat was expected to continue through late tonight as a high-pressure system off the Atlantic coast ushered in steamy, subtropical air.

"Dangerously hot conditions will continue through Sunday," the National Weather Service (NWS) warned for the Washington and Baltimore area, where forecasters predicted high temperatures ranging from 35C to 38C for a second day.

"High temperatures and humidity could quickly cause heat stress or heat stroke if precautions are not taken," the NWS added.

People were urged to stay hydrated, watch out for the sick and elderly, stay inside as much as possible and not leave children or animals in cars. 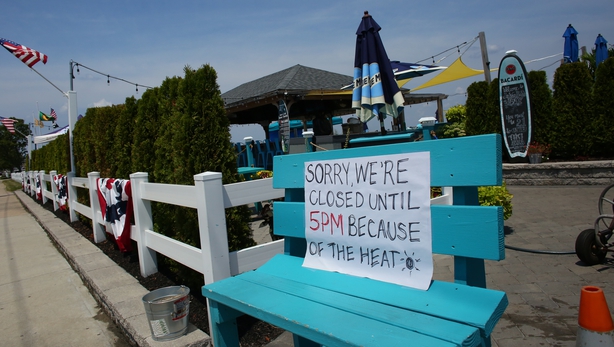 The heat wave already claimed at least three lives, including two earlier in the week in the eastern state of Maryland.

In Arkansas, 32-year-old former NFL player Mitch Petrus died of heatstroke on Thursday after working outside his family's shop.

The New York City Triathlon, which had been scheduled for today, was cancelled for the first time since its founding in 2001.

Sunday could be one of the HOTTEST days in New York City in the last 7 years. Make a plan to stay cool!

☑️ Use A/C or go to a Cooling Center
☑️ Drink water
☑️ Stay inside
☑️ Check on vulnerable friends or neighborshttps://t.co/A9pGRg33Cx pic.twitter.com/qDDIE1UsTT

Meanwhile the two-day OZY Fest - a food, comedy and music festival set for Central Park - was also called off.

In Washington, a popular weekly outdoor summer jazz concert at the National Gallery of Art Sculpture Garden was cancelled. 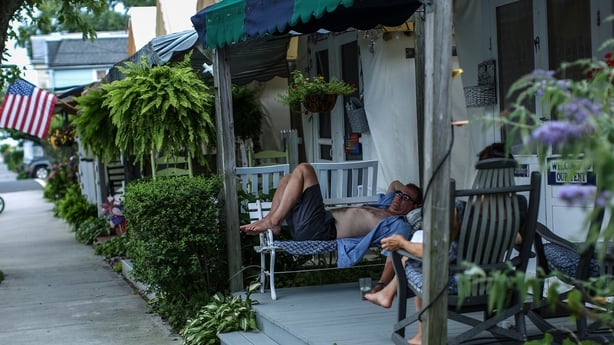 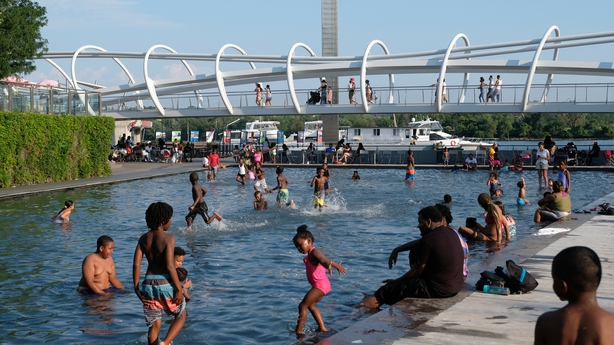 At least three public defenders said on Twitter that inmates in New York's notorious Rikers Island jail complex were suffering with no air conditioning, and that some guards had turned off fans as punishment, resulting in "deadly conditions".

The Brooklyn Defender Services legal aid group said some inmates did not have summer clothing, only long underwear provided by the group last winter.

Top officials from the city's Department of Corrections were at the facility monitoring the response to the heat wave to "protect health and safety of everyone in the facility," Mr de Blasio wrote on Twitter.

The department said in a statement to AFP that extra staff were on hand to distribute summer clothing, and clinics were open around the clock to treat heat-related symptoms.

Those in units without air conditioning were given access to fans, ice, water and "multiple cool showers."

Take this heat wave seriously. If you or someone you know needs a cool place to stay, head to https://t.co/A9pGRgkEu5 and find one of our city's cooling centers closest to your neighborhood. pic.twitter.com/IAAYwhO0ZW

The city's electrical grid was so far handling the extra demand, which came just a week after a major outage, blamed on mechanical problems, left tens of thousands of Manhattan residents in the dark.

Such high temperatures in the US northeast are unusual.

In Boston, where the weather service said that yesterday and today would be "major scorchers," city officials scrapped entry fees at public pools.

Earlier in the week, the National Weather Service office in the Midwestern city of Omaha baked a tray of scones on the dashboard of a parked car.

Climate data showed June was the hottest month on record worldwide, with a heat wave across Europe smashing national records.