New York Police Department (NYPD) Deputy Commissioner John Miller said the arrested man claimed he was taking a shortcut through the cathedral yesterday after his car ran out of petrol, but his answers were "inconsistent and evasive".

"We don't know what his mindset was, what his motive was," Deputy Commissioner Miller told a press conference on the steps of the cathedral, a neo-Gothic structure in the heart of Manhattan. 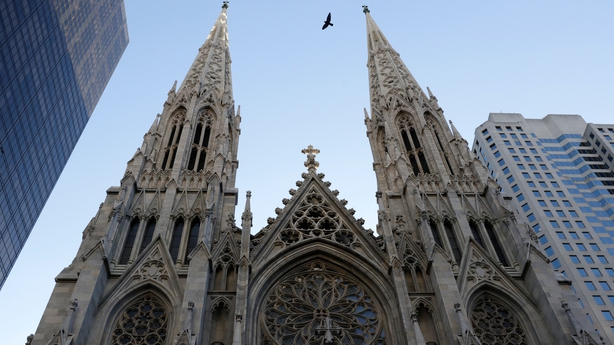 The man was confronted by a cathedral security officer and was told he cannot go inside carrying those items, according to the police.

"At that point, some gasoline apparently spills out onto the floor as he's turned around," Deputy Commissioner Miller said.

After an alarm was raised, officers from the NYPD's counter-terrorism bureau caught up to the man and arrested him after questioning.

"His basic story was he was cutting through the cathedral ... that his car had run out of gas," Deputy Commissioner Miller said.

"We took a look at the vehicle. It was not out of gas and at that point he was taken into custody."

Deputy Commissioner Miller said the 37-year-old suspect was "known to police," who are currently looking into his background.

St Patrick's, a neo-gothic church across from the Rockefeller Center, has stood in the heart of Manhattan since 1879 and is considered one of the most important symbols of the Catholic Church in the United States.

Around 7:55pm, a man walked into St. Patrick’s Cathedral in Manhattan with gas cans and lighter fluid, and was subsequently apprehended by @NYPDCT without incident. We thank our partners for their help, and remember - if you see something, say something. pic.twitter.com/qEbmklnqzQ