He was president for only four years, but George HW Bush shaped US history for decades, taking on tough jobs from Beijing to the CIA, ousting Iraqi forces from Kuwait, sealing a breakthrough budget deal that cost him an election and fathering a future president.

His death at the age of 94 came seven months after the death of his wife, Barbara, to whom he was married for 73 years.

His presidency, which ran from 1989 to 1993, was defined by two events - his aggressive response to Iraqi President Saddam Hussein's invasion of Kuwait in 1990, and the soon-to-be-broken "read my lips" pledge he made not to raise taxes while running for president in 1988.

At a time when the Cold War was ending and the influence of Soviet-style communism was withering, Bush's military and diplomatic actions firmly cast the US as the world's leading superpower.

After Bush emphatically said Saddam's aggression "will not stand," US-led forces routed Iraq's army in the Gulf War, driving it from Kuwait while stopping short of taking Baghdad, Iraq's capital.

Bush's popularity rating among Americans soared to about 90%.

Twenty months later, in 1992, the Republican Bush lost his bid for re-election to Democrat Bill Clinton, whose folksy manner and focus on the economy struck a chord with many Americans and made Bush seem disconnected from voters for focusing on foreign policy over domestic issues.

Despite a broad coalition that included several Arab states, US involvement in the Gulf War was seen as a violation of Arab sovereignty by some in the Middle East, and led a few militant groups - namely Osama bin Laden's recently formed al-Qaeda – to turn their focus toward fighting US influence.

A decade later, the presidency of Bush's son, George W Bush, would be jolted by al-Qaeda's deadly hijacking attacks on the United States on 11 September 2001.

The Bush political dynasty also included Bush's father, who was a US senator, and son Jeb, a former governor of Florida who mounted his own run for the presidency in 2015 but dropped out in February 2016 after gaining little traction.

Bush did not endorse Republican Donald Trump, the eventual winner in the 2016 presidential election, who attacked both Jeb and George W Bush during his campaign.

The elder Bush did not publicly say whom he voted for in the election, but a source told CNN he went for the Democratic nominee, Hillary Clinton.

George Herbert Walker Bush was a moderate Republican known for his diplomacy and ability to compromise with Democrats.

He was a symbol of a relatively collegial period in Washington that nevertheless set the stage for the divisive, partisan gridlock that now plagues the US capital.

When he accepted the Republican nomination for president in 1988, Bush, then Ronald Reagan's vice president, was trying to win over conservatives who had more enthusiasm for Reagan. He answered questions about his conservatism with an emphatic pledge.

Later as president, Bush agreed to raise taxes to help reduce the government's deficit. The reversal angered conservatives and led in 1992 to an unusual primary challenge of the incumbent president by another Republican, conservative commentator Pat Buchanan.

Bush easily defeated Buchanan for the Republican nomination, but his stance on taxes, the country's debt and the lagging economy led Texas billionaire Ross Perot to launch an independent presidential campaign.

Clinton ended up winning the race with just 43% of the popular vote, ousting Bush from the White House after one term.

Bush's loss in the 1992 election made him a cautionary tale for a generation of Republicans, a lesson that endures in today's showdowns over the federal budget and spending.

Years later, in 2014, Bush was honoured with the Profile in Courage Award for his 1990 budget compromise by the John F Kennedy Library Foundation, which praised the "decision to put country above party and political prospects."

In issuing the award for his compromise with Democrats, the foundation wrote: "Although he recognised the 1990 budget deal might doom his prospects for re-election, he did what he thought was best for the country and has since been credited with helping to lay the foundation of the economic growth of the1990s that followed."

A major accomplishment of Bush's presidency can be seen every day across America - from the cut-away curbs on street intersections to the ramps outside buildings that allow access to those confined to wheelchairs.

They were mandated by the 1990 Americans with Disabilities Act, the law Bush signed that barred discrimination against the disabled in the workplace and ensured them equal access to public accommodations.

Bush backed the law despite concerns from some conservatives in his party about the cost and potential litigation.

George HW Bush was born on 12 June, 1924, in Milton, Massachusetts, into a New England family, the son of financier Prescott Bush, who later would be elected to the US Senate from Connecticut, and Dorothy Bush.

He grew up in the wealthy New York City suburb of Greenwich, Connecticut, and was educated at exclusive private schools and Yale University.

He flew 58 missions off carriers in the Pacific, was shot down at sea and rescued by a US submarine.

As the war neared an end in January 1945, Bush married his sweetheart, Barbara Pierce. They had six children.

After the war, Bush rejected a Wall Street job and, aided by his father's business connections, moved to West Texas to start an oil drilling firm.

He made a fortune and began a rise to national prominence by winning elections to the US House of Representatives from Texas in 1966 and 1968.

He lost two races for a US Senate seat, but Bush's star continued to rise within the Republican Party.

President Richard Nixon appointed him ambassador to the United Nations in 1971, and two years later, Bush became chairman of the Republican National Committee.

Another Republican president, Gerald Ford, appointed him as an envoy to China in 1974 and then director of the CIA.

Bush was credited with helping to restore morale after the CIA had undergone investigations into illegal and unauthorised activities.

In 1998, the agency's headquarters in Langley, Virginia, was named the George Bush Center for Intelligence.

Bush ran for president in 1980 and squared off in the primaries against Ronald Reagan, a former actor and California governor who cast himself as a tough-talking conservative in contrast with Democratic President Jimmy Carter.

Bush defeated Reagan in several primaries and ridiculed Reagan's devotion to supply-side economics, which holds that the best way to spur growth is through lower taxes on income and capital gains.

Reagan eventually swept aside Bush to win the Republican nomination and then asked Bush to be his vice presidential running mate, in part to help ease concerns among independent voters about Reagan's conservative views. 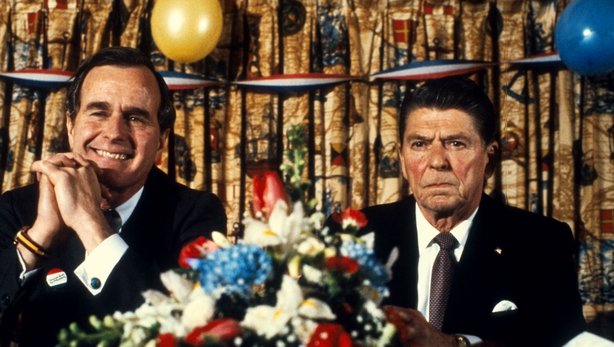 After Reagan's two terms, Bush was able to campaign for the presidency as the anointed heir to Reagan's conservative mantle.

Even so, Bush sought to distinguish himself from the incumbent, and reach out to those who thought Reagan's policies had been too harsh on the poor and other vulnerable people.

He famously called for a "kinder, gentler nation" in his 1988 speech accepting his party's nomination.

He breezed into office, thrashing the Democratic nominee, Massachusetts Governor Michael Dukakis, in 40 of the 50 US states.

Bush had been derided by political detractors as a "wimp" when he was vice president, but he did not hesitate to use force as a foreign policy tool during his presidency. 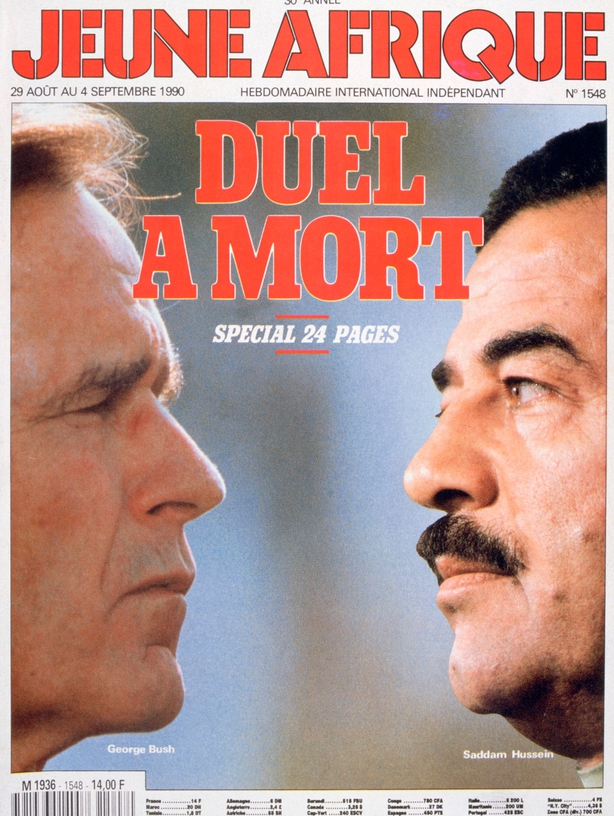 Bush's strong response and the overwhelming allied victory in forcing out Iraqi troops led for a time to a national euphoria.

The war against Saddam pushed Bush to a level of unprecedented popularity that was equaled only by his son after the 11 September 2001 attacks on the US.

A decade later, the younger Bush would invade Iraq and drive Saddam from power.

Beyond the flap over his raising taxes and the impact of Perot's candidacy, Bush's 1992 loss was tied to a stagnant economy that sent the US jobless rate to 7.5% and left Bush open to charges that Republican policies had failed.

Critics cited Bush's lack of a clear vision of what he wanted to do on domestic issues - what he called the "vision thing" in his oft-fractured phrasing.

Some political analysts said Bush's re-election effort was undermined by his decision not to take advantage of his popularity after the Gulf War to propose bold domestic initiatives.

"There was a period of about two weeks when we could have done anything. But it slipped away," said a mid-level aide who had argued in favour of bold, postwar programmes.

His lone postwar initiative was an international one.

He sent his secretary of state, James Baker, to the Middle East to set in motion a process that led to a 1991 Madrid peace conference and eventually the signing of a peace pact between Israel and the Palestine Liberation Organisation in 1993.

The signing ceremony for the agreement brought Bush back to the Clinton White House, and he returned later to join Clinton and former presidents Ford and Carter to push for passage of the North American Free Trade Agreement.

The pact, which was approved in November 1993 and joined the United States, Mexico and Canada in a huge trading bloc, had been negotiated by the elder Bush's administration.

In 2000, eight years after he lost his bid for re-election, the elder Bush saw his son, George W, defeat Clinton's vice president, Al Gore, by a razor-thin margin in a disputed election for president.

During his later years, Bush referred to himself as "41" and called George W "43" - their spots on the numerical list of US presidents.

After he lost to Clinton in 1992, Bush and his wife returned to their home in Houston. Britain's Queen Elizabeth awarded him an honourary knighthood in November 1993 for his leadership during the Gulf War.

Bush later became good friends with Clinton, joining him to raise money for survivors of the 26 December 2004, Indian Ocean tsunami that killed more than 300,000 people.

The elder Bush returned to the White House in 2011.

A tall, athletic man with a friendly manner, Bush played baseball at Yale and was fond of jogging, golf and fast boats. He loved pitching horseshoes, hunting, fishing and spending time at the family's seaside home in Maine. 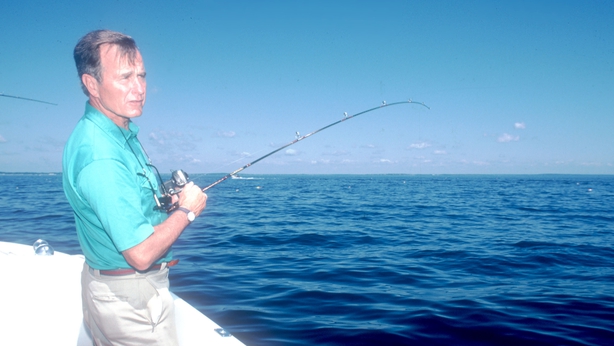 Bush maintained an active life until his later years. He gave speeches and went tandem skydiving to celebrate his 75th, 80th, 85th and 90th birthdays.

In April 2014, he made a surprise appearance on the tarmac in Houston to greet the Obamas on Air Force One, sporting his trademark colorful socks in his wheelchair.

"When the president comes to your hometown, you show up and welcome him," Bush told reporters.

He marked the 75th anniversary of Japan's attack on Pearl Harbor in December 2016 by attending a ceremony at his library at Texas A&M University where a former rival for the presidency, former Republican Senator Bob Dole, was presented an award for public service.

In one of his last public appearances, Bush was on the field as son George W threw out the first ball at a Houston Astros' World Series game against the Los Angeles Dodgers in October 2017. 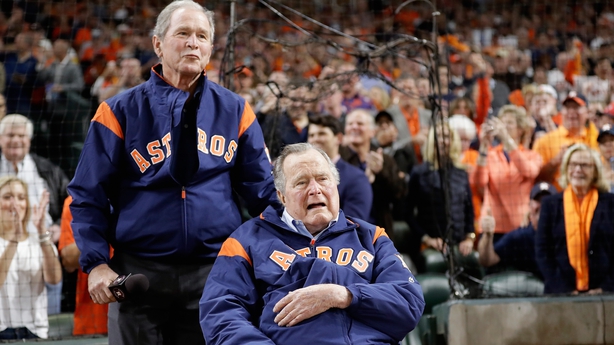 Bush had kept a low public profile after George W won the presidency in 2000 so his son would not be seen as merely an adjunct to his father.

But when seen in public, such as during his son's swearing-in on the Capitol steps in January 2001, the father could not hide his pride.

"He was daring and courageous, always seeking new adventures and new challenges," the son wrote, describing his father as a humble family man who was "determined to live his life to the fullest - to the very end."