The woman identified by police as the attacker who wounded three people at YouTube's headquarters in California was a vegan blogger who accused the video-sharing service of discriminating against her, according to her online profile.

A 36-year-old man who was injured in the attack remains in a serious condition in hospital.

Two women, aged  32 and 27, who were seriously wounded in the attack were discharged from hospital this evening.

Authorities did not release names of the victims.

"The San Bruno Police Department is investigating a motive for this shooting. At this time there is no evidence that the shooter knew the victims of this shooting or that individuals were specifically targeted," police said in a statement.

Aghdam's online profile shows she was a vegan activist who ran a website called NasimeSabz.com, meaning "Green Breeze" in Persian, where she posted about Persian culture and veganism, as well as long passages critical of YouTube.

A screenshot of a video posted on Aghnam's YouTube channel before it was taken down yesterday, showed her complaining that "YouTube filtered my channels to keep them from getting views!"

US media said the suspect had voiced complaints online about YouTube https://t.co/3X3mLyzhht pic.twitter.com/t73ptFrjRe

Those complaints included claims the company was not sharing enough revenue with people who create videos for the platform.

"There is no equal growth opportunity on YouTube, or any other video-sharing site, your channel will grow if they want to," read one posting on the site.

Employees recounted frantic scenes as they fled the building, with one saying he saw blood on the floor as he escaped.

"We were sitting in a meeting and then we heard people running because it was rumbling the floor. First thought was earthquake," employee Todd Sherman tweeted.

We were sitting in a meeting and then we heard people running because it was rumbling the floor. First thought was earthquake. https://t.co/gmolQmRXm1

Mr Sherman said that as he headed for an exit "someone said that there was a person with a gun," and added "at that point every new person I saw was a potential shooter."

His tweets continued: "I looked down and saw blood drips on the floor and stairs. Peeked around for threats and then we headed downstairs and out the front." 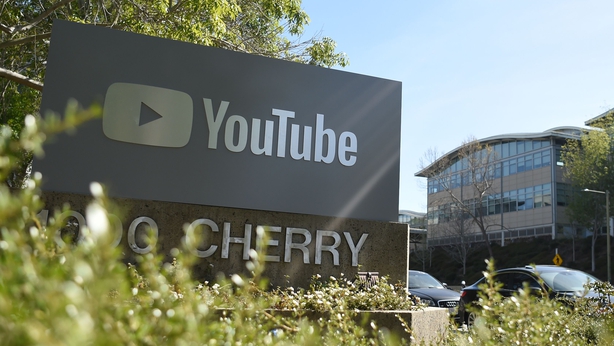 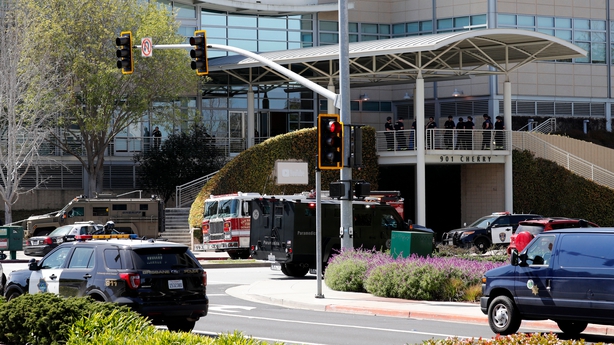 In a recording of a 911 call posted online by the Los Angeles Times, a dispatcher can be heard saying: "Shooter. Another party said they spotted someone with a gun. Suspect came from the back patio ... Again we have a report of a subject with a gun. They heard seven or eight shots being fired."

Dozens of emergency vehicles quickly converged on the YouTube campus, and police could be seen on televised aerial video systematically frisking several employees leaving the area with their hands raised.

A fourth person was also taken to a local hospital with an ankle injury from fleeing the scene.

"It's with great sadness that I tell you - based on the latest information - four people were injured in this horrific act of violence," Google Chief Executive Sundar Pichai said in letter to employees posted on Twitter.

"I know a lot of you are in shock right now. Over the coming days, we will continue to provide support to help everyone in our Google family heal from this unimaginable tragedy."

In a separate tweet, Mr Pichai said he and YouTube Chief Executive Susan Wojcicki were "focused on supporting our employees and the @YouTube community through this difficult time together."

There are no words to describe the tragedy that occurred today. @SusanWojcicki & I are focused on supporting our employees & the @YouTube community through this difficult time together. Thank you to the police & first responders for their efforts, and to all for msgs of support.

US President Donald Trump said on Twitter that he had been briefed on the shooting.

"Our thoughts and prayers are with everybody involved," he tweeted.

"Thank you to our phenomenal law enforcement officers and first responders that are currently on the scene."

Was just briefed on the shooting at YouTube’s HQ in San Bruno, California. Our thoughts and prayers are with everybody involved. Thank you to our phenomenal Law Enforcement Officers and First Responders that are currently on the scene.

Last month, YouTube announced it would ban content promoting the sale of guns and gun accessories, as well as videos that teach how to make guns.