The shooting at a Florida high school yesterday took to 18 the number of gun incidents across the United States so far this year.

The number underscored how commonplace gun violence has become in the US, with students in elementary and secondary schools regularly performing drills on how to react in an "active shooter" situation. 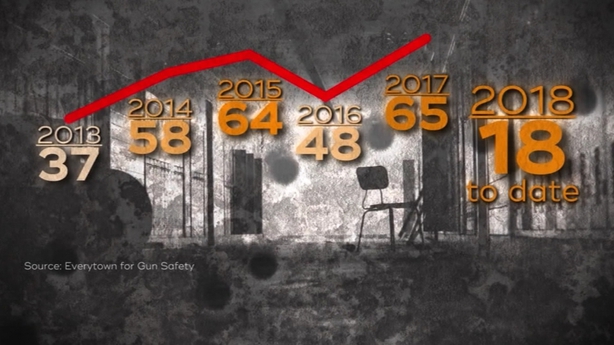 According to the independent Everytown for Gun Safety group, eight of the 18 school shooting incidents so far this year, which cover primary schools to universities, involved guns being discharged with no one injured.

Two were suicide attempts and the rest attacks on others.

On 23 January, a 15-year-old boy opened fire with a handgun at the start of the school day at a Kentucky high school, killing two students and wounding others.

The day before, a teenager was wounded by a shot fired in her school cafeteria in Texas.

The same day, a bullet grazed a 14-year-old boy in the parking lot of a New Orleans high school.

Earlier in January, shootings took place in Iowa, Washington state and California, among other places.

The frequency of the incidents has somewhat dulled their ability to shock.

The nation was stunned on 14 December 2012, when Adam Lanza, 20, shot dead 20 schoolchildren and six teachers at Sandy Hook Elementary School in Newtown, Connecticut.

Since January 2013, there have been at least 291 school shootings, according to Everytown for Gun Safety, a non-profit group that advocates for gun control.

"Are we coming to expect these mass shootings as a kind of routine matter?" Florida Senator Bill Nelson told CNN.

Each incident like the one in Parkland brings calls for more strict laws on gun sales and ownership, but gun rights campaigners regularly succeed in stifling those calls.

Indeed, laws on carrying guns in public have been made less strict in many areas.

"If more guns and fewer gun laws made us safer, we wouldn't have the highest rate of gun violence among peer nations," Shannon Watts, founder of Moms Demand Action for Gun Sense in America, said on Twitter.