Joe Biden said that US democracy proved "resilient" against Donald Trump's "abuse of power" after the Electoral College confirmed him as the next US president, shutting the door further on unprecedented efforts to overturn the results.

Mr Biden was referring to a Republican lawsuit, supported by Mr Trump, that sought to overturn the results in several key states, before it was rejected unanimously by the Supreme Court last Friday.

Mr Biden praised voters for casting ballots in record numbers despite fears of Covid-19 and "enormous political pressure, verbal abuse and even threats of physical violence" against those running the election.

"The flame of democracy was lit in this nation a long time ago. And we now know nothing, not even a pandemic or an abuse of power, can extinguish that," Mr Biden said.

"Our democracy - pushed, tested, threatened - proved to be resilient, true, and strong."

Joe Biden called on Americans to "turn the page" on the Trump era, and "to unite and to heal", hours after prevailing over the Republican in the state-by-state Electoral College vote that officially determines the U.S. presidency. I Read more: https://t.co/X8BUVylQPH pic.twitter.com/8rfKTBfqQ7

Mr Biden said that Mr Trump has had full opportunity to contest the results in court and "in every case no cause or evidence was found to reverse or question or dispute".

With the Electoral College having formalised his victory just hours earlier, Mr Biden told the bitterly divided country: "It's time to turn the page."

"I'm convinced we can work together for the good of the nation," he said. 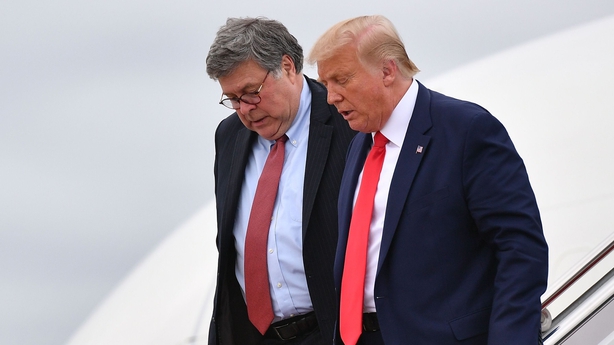 Mr Trump continues to maintain that he was cheated of victory, even if his lawyers have not persuaded one court that they have a case.

Yesterday, he announced that Attorney General Bill Barr, who contradicted his fraud claims, would leave his post next week.

"Bill will be leaving just before Christmas to spend the holidays with his family," Mr Trump tweeted.

The Electoral College vote, a formality confirming the will of voters expressed at the polls, is usually ignored by all but hardcore politics buffs.

This year, the somewhat arcane procedure took centre stage as the US election system withstood weeks of assaults from the powerful president and much of his party.

Mr Biden only needed 270 of the 538 Electoral College votes, which are divided up among the 50 states and he was headed for a total of 306 against Mr Trump's 232.

Counting was under way all day and when it got to California, the Democrat went over the minimum amount, making him officially the president-elect from that point on.

California's electors burst into applause as the presiding officer read out the tally.

Mr Biden, Barack Obama's former vice president, will be sworn in as the 46th president on 20 January.