Hundreds of people have gathered in Belfast to demand the scrapping of the British government's contentious plan to deal with the legacy of the Northern Ireland Troubles.

Relatives of those killed during the conflict were among those who protested in heavy rain outside Belfast City Hall against the controversial legislation being put through Parliament.

Demonstrators marched from various parts of the city ahead of the event outside the landmark building in central Belfast.

The majority of bereaved families in attendance lost loved ones in killings involving state forces.

The Northern Ireland Troubles (Legacy and Reconciliation) Bill has already been through the UK House of Commons and is now set for consideration by the House of Lords.

It proposes a form of amnesty for perpetrators of Troubles crimes in exchange for co-operation with a new truth recovery body.

The Bill, if enacted, would also end inquests and civil proceedings related to the conflict.

The changes are opposed by political parties and victims' groups in Northern Ireland, as well the Irish government. 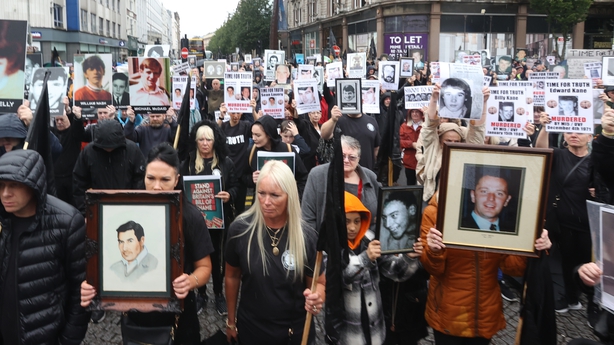 Mr Finucane, whose solicitor father Pat was murdered by loyalists in 1989 in a killing linked to state agents, told the event the Bill is designed to cover up the UK government's role in the conflict.

"The new Prime Minister Liz Truss needs to hear that we will not allow our rights to be cherry picked or traded ever by a British government," he said.

"She must bin this flawed legislation without delay. "This has and remains a long campaign and today is but another staging point.

"We should and I know we will take hope that the truth will out."

Natasha Butler, whose grandfather Paddy Butler was shot dead by soldiers in west Belfast in 1972, branded the legislation a "slap in the face to victims".

"We will stop this obnoxious Bill by whatever means possible. We must never give up. We must fight on. We will fight on and we will not go away until truth and justice are achieved."