The Minister for Foreign Affairs has called on the British government to step back from unilaterally introducing legislation which breaches international law, and which he believes threatens the relationship between the UK and Irish governments.

Simon Coveney was reacting to moves by the British government to introduce legislation tomorrow to set aside parts of the Northern Ireland protocol.

Northern Ireland Secretary Brandon Lewis insisted the bill was "lawful" and necessary to fix problems in the EU protocol, so as to restore a power-sharing government.

This afternoon Mr Coveney described this as a piece of legislation which is deeply damaging to the reputation of the UK internationally.

He said in many ways the UK has been the standard bearer for international law and the protection of that law, and this is damaging that reputation in a fundamental way, and it is also a new low in terms of the relationship between Britain and Ireland.

"My message to the UK government is this is a mistake, and to move away from unilaterally introducing legislation which breaches international law," he said.

Mr Coveney said that Britain should instead "come to the negotiating table where they will have a willing partner in the EU and in Ireland waiting to solve the outstanding issues in relation to the protocol". 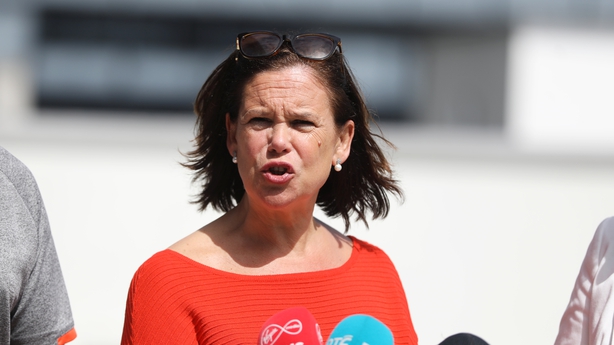 Sinn Féin leader Mary Lou McDonald has said the only way lawful change can be made to the Northern Ireland protocol is to work with the European Commission.

''There is no other way to do it'' Ms McDonald told RTÉ News.

''Any suggestion or move by the British government to change the Protocol unilaterally, to ditch the protocol or any part of it is in breach of international law,'' she said.

Ms McDonald claimed thousands of jobs are at risk if the British government changes the protocol.

''It is now obvious that the British government proposes to breach international law, to damage the Good Friday Agreement and to cause real economic damage to Ireland, north and south,'' Ms McDonald said.

The Sinn Féin leader said if changes were made there would be a very strong reaction not just domestically but internationally.

''What we need is respect for agreements that are made, delivery of agreements made, not this kind of reckless brinkmanship that Boris Johnson and his government are absolutely intent on.

"We want the British Government to stop the Brinkmanship, stop the games, stop using their own internal party ambitions,'' she said.

The British government has confirmed it will table legislation to override parts of the protocol, which was jointly agreed by the UK and EU as part of the Withdrawal Agreement to keep Ireland's land border free-flowing.

The arrangements instead require regulatory checks and customs declarations on goods moving between Britain and Northern Ireland.

Unionists in Northern Ireland are opposed to the protocol, claiming it has undermined the North's place within the UK.

The DUP has blocked the formation of a new power-sharing government at Stormont following last month's Assembly election in protest at the protocol.

The bill would see the British government move without the consent of the EU to change the terms of the international treaty in a bid to reduce the checks on the movement of goods across the Irish Sea.

The EU has made clear that such a step would represent a breach of international law and could prompt retaliatory action from the bloc.

Speaking on Sky News, Mr Lewis said the legislation they will outline tomorrow "is within the law".

"What we're going to do is lawful and it is correct," he said.

"We will be setting out our legal position on this. People will see that what we're proposing resolves the key issues within the protocol that don't work."

Mr Lewis said they are seeking to "fix the problems" they are seeing with the protocol, and to ensure it respects all aspects of the Good Friday Agreement.

"It's around how the protocol's being implemented, the lack of flexibility we've seen from the EU over the last year and a half of trying to negotiate them where they've not really moved at all," he said.

"In fact at the moment, what the EU are proposing would send us backwards from where we are today.

"That isn't sustainable, and every political party in Northern Ireland wants to see changes to the protocol."

Mr Lewis also accused the EU of being "disingenuous" about offering flexibilities on the protocol.

He told the BBC's Sunday Morning programme: "What they've been saying consistently across the media and have been reported as saying is that they're offering flexibilities. Well, they're not.

"What the EU are offering is some flexibility based on a fully-implemented protocol. That would be, actually, worse than the situation we've got today."

He added: "So, I do think they've been disingenuous in suggesting they're being flexible when in fact they've not shown the flexibility that's required to resolve these issues for the people of Northern Ireland."

She said: "This government seems to be developing a record for lawbreaking and it is not one that the Labour Party can support.

"We helped bring in the Good Friday Agreement, we are deeply, passionately committed to it.

"We want the Northern Ireland Protocol to work but we know to get it to work we have to negotiate and work with our European partners."