A change to blood donation rules for gay and bisexual men in Northern Ireland has been hailed as a "substantial step towards full equality".

Men who have been in a same-sex relationship with one partner for more than three months are now able to donate, which will increase the number of eligible blood donors.

The change has already been implemented in parts of the UK, but was delayed in Northern Ireland due to staffing and training issues which prevented the change from taking place in June.

From now, everyone who donates blood will be asked the same questions on health, travel and sexual behaviour regardless of their gender or sexual orientation.

Previously, men who had been in a same-sex relationship had to wait for a year after their last sexual activity before donating blood.

The rule was later reduced to three months before the introduction of the new assessment system. 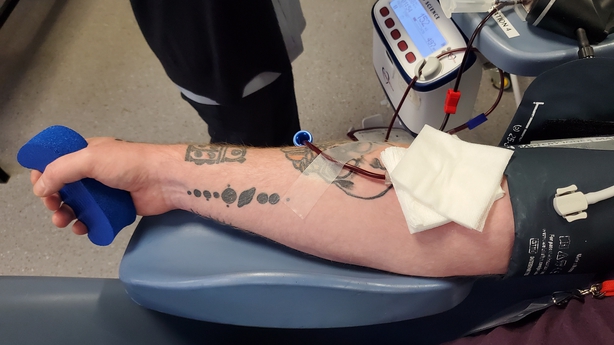 One of the first to donate following the change in the rules was John O'Doherty, director of LGBTQ support group the Rainbow Project.

He said: "It is a substantial step towards full equality for LGBTQ people. This is an important day, an important opportunity for our community.

"The blood ban was first introduced in response to the HIV and Aids crisis when we understood very little about HIV and was appropriately introduced.

"We have stated that it was important that any changes were based on best available medical and scientific evidence and that is what has happened over the past eight or so years.

"What was originally a lifestyle deferral, meaning if you were a man who had sex with another man, you were never allowed to give blood, that was stepped down to a one-year deferral period. That was then reduced to a three-month deferral period and now we have the introduction of the new FAIR (For the Assessment of Individualised Risk) assessment.

"I hope there is a good uptake. With the Covid pandemic, blood transfusion service was closed to new donors for a period of time.

"A number of procedures have been cancelled because of the epidemic and as we try to deal with a backlog of procedures we are going to need a steady and secure blood supply.

"There has never been a better time to register to give blood."

A statement from the Northern Ireland Blood Transfusion Service said: "NIBTS will assess donor eligibility on a person-by-person basis instead of applying across-the-board restrictions which have previously excluded potential donors.

"Using a donor's individual experiences to determine whether that person is eligible to donate makes the process fairer for all donors and means more people will be able to give blood than ever before.

"It also means we will be asking every donor the same questions - regardless of gender or sexual orientation.

"These changes to the way UK blood services assess the risk of transfusion-transmitted infections incorporate the key recommendations of the 2020 FAIR report.

"The recommendations were designed by epidemiology, sexual health and infectious disease experts to make sure we keep the blood supply safe while making blood donation fairer and more accessible to all.

"NIBTS are working in collaboration with Rainbow Project to ensure all those eligible to donate blood can do so safely."