Long-standing DUP MP Jeffrey Donaldson has confirmed he has submitted his name to become the next leader of the party.

In a statement, Mr Donaldson said he had submitted his nomination papers.

"It is with optimism for the future and recognition of the challenges facing Northern Ireland that today, I put my name forward for the leadership of the Democratic Unionist Party," he said.

Mr Donaldson highlighted his opposition to the Northern Ireland Protocol in his statement.

"Now, more than ever, we need to unite in the face of the threats posed to Northern Ireland by the protocol," he said.

"Make no mistake, this is the number one issue facing our country, our people and our place within the United Kingdom.

"If elected, I will ensure that the Government doesn't just listen, but recognises the need to take decisive action to deal quickly with the protocol.

"A failure to act will undoubtedly have consequences for the stability of our political institutions and the prosperity of our economy.

"We need to unite as a party and take heed of the challenges that Northern Ireland faces.

"We need to restore confidence and faith in our party and to work with other unionists of a like mind to broaden the appeal of unionism and secure the Union for the future.

. @J_Donaldson_MP confirms DUP leadership bid + makes clear priority - "we need to unite in the face of the threats posed to Northern Ireland by the protocol.l…this is the number one issue facing our country, our people and our place within the United Kingdom" @rtenews pic.twitter.com/ZR4LpK1Igj

"We need to deliver tangible results for the people who have put their faith in us and that also means building bridges across our divided communities and developing what a shared future means for everyone in Northern Ireland regardless of their background or belief.

"I believe that if I am elected leader, I can help the party deliver on these issues and put the Democratic Unionist Party on the path to victory at next year's election."

Earlier, Northern Ireland First Minister Paul Givan said Mr Donaldson had his full support if he chose to run for leader of the party.

Mr Givan said that he spoke to Mr Donaldson over the weekend, and described him as a "formidable politician" who "has a lot to offer Northern Ireland".

"I have spoken to Jeffrey Donaldson over the weekend, I've encouraged him to put his name forward, if he does, he'll have my full support," he said.

Mr Givan was speaking at his first official public engagement as First Minister since taking up office last Thursday.

Paul Givan said he encouraged Jeffrey Donaldson to put his name forward for the DUP leadership and that if he does, he will have his "full support" ⁦@rtenews⁩ ⁦@vincekearney⁩ pic.twitter.com/0v2WFiFsIy

The process to elect a new leader began at the weekend, following the shock resignation of Edwin Poots last Thursday.

Interested candidates must submit their intention to contest a leadership election in writing by midday tomorrow. However, it is not expected that anyone will run against Mr Donaldson.

If he is the only candidate, Mr Donaldson could be announced as the new DUP leader as early as tomorrow, and formally ratified at a party executive meeting early next week.

However, if there is more than one candidate, the party's electoral college of 36 MLAs and MPs will cast their votes on Saturday.

Mr Donaldson narrowly lost out to Mr Poots last month by 19 votes to 17, in the party's first leadership contest in its 50-year history.

That contest was sparked by an internal revolt against former leader and first minister Arlene Foster.

This latest election also comes following the ousting of her successor, Mr Poots, from within the DUP.

His resignation came after just 21 days in the job, the shortest leadership term in the party's history. 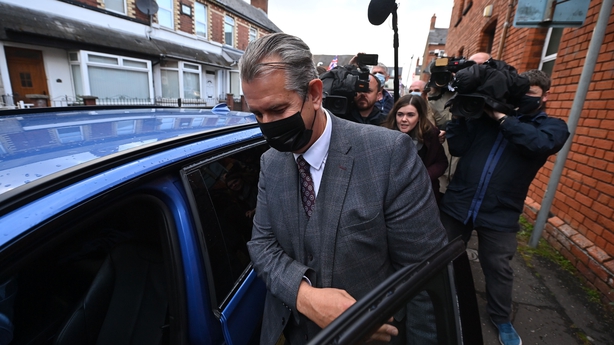 However, Mr Givan has now been told by the party's officers that he will have to step down from the role once a new leader is in place.

His resignation will then once again trigger a seven-day countdown for the DUP and Sinn Féin to re-nominate their choices for the roles of First and Deputy First Ministers.

Today, Mr Givan said that his own personal feelings are secondary to the needs of the people in Northern Ireland.

He said the party now has a process in place and needs to be given the space to work through that process and for a new leadership team to be put in place.

He said his focus is on ensuring that we have effective government and stability.

Mr Givan would not divulge any details of conversations that took place within his party since last Thursday and did not say when he intends to step down from his post as First Minister.

"I've had conversations over the weekend with different individuals," he said, adding: "I'll have conversations with our leadership team in due course."

He said exactly what that date might be will form part of those discussions "over the coming days and weeks".

Meanwhile, Northern Ireland's Justice Minister has said the DUP needs "a dose of realism" in relation to the protocol and she cannot see the UK abandoning the protocol in its entirety.

Speaking on RTÉ's Drivetime Naomi Long, who is also the leader of the Alliance Party, said this is a much more fundamental problem than the DUP realises.

She said if the new DUP leader wants to try to find solutions and to make the protocol more manageable, then that is a space in which she is happy to work with.

"It will require them to set aside their ideological position which is that this is a threat to the constitutional position of Northern Ireland and needs to be scrapped, because you can't both modify and scrap something at the same time," Ms Long said.