A judge has ordered the disclosure of reasons why notorious loyalist killer Michael Stone was freed from prison.

Stone killed three people in a gun and grenade attack at Milltown Cemetery in west Belfast following an IRA funeral in 1988.

His lawyer said his life would be in danger if details were made public so the summary document will be shared with legal representatives, but kept confidential on a temporary basis.

Action was brought at Belfast's High Court by a relative of one of Stone's victims after he was freed earlier this week following a decision by Northern Ireland's Parole Commission.

Stone had been serving a 30-year jail term.

Mr Justice Adrian Colton said: "The applicant seeks an order that parole commissioners should provide the reasons for the decision to release the prisoner.

"I direct that, having heard the position of the respective parties, that by consent the parole commissioners will provide the applicant with a summary of the reasons for the decision with appropriate redactions.

"The disclosure will remain confidential pending any further order of the court."

A legal challenge was launched by the victims' families in a bid to prevent the former Ulster Defence Association (UDA) member from applying for early release from prison, but was dismissed by the Court of Appeal last year.

He was freed under the Good Friday Agreement in 2000, but was returned to prison six years later for trying to kill then Sinn Féin leaders Gerry Adams and Martin McGuinness at Stormont. 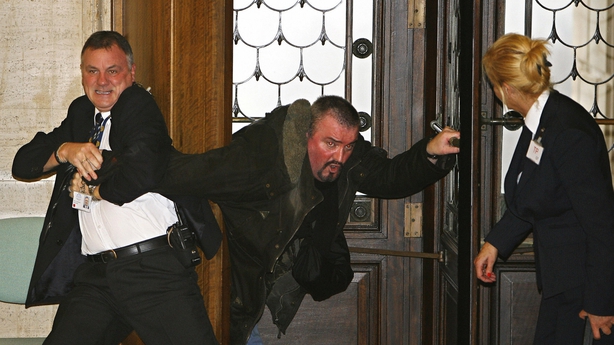 Mr Justice Colton said he made the order to release details in accordance with the principle that justice be conducted openly.

He told the court in Belfast: "If the commissioners are to release a summary of the reasons, properly redacted to protect the Article 8 rights of the prisoner, why should there be any confidentiality?

"It is really a public document. There is a public interest in this case."

Stone's lawyer, Hugh Southey, opposed the disclosure, saying: "There has been reference to my client's Article 8 (privacy) rights but we also have concerns about the safety of my client and people associated with him.

"We understand, and there is material available that we have seen, that confirms there are reasons to be concerned about his safety.

"If the court is not with us on that we agree with the submissions made that there might be appropriate safeguards."

Stormont's justice department said it had no objections to the disclosure and the commissioners agreed to comply speedily.

The legal action was brought by Deborah McGuinness, sister of one of Stone's victims, 20-year-old Thomas McErlean.