Aviation workers have staged a demonstration at Belfast International Airport calling for Westminster and Stormont to step in to save jobs.

The Keep Northern Ireland Connected - Save Our Airports protest was part of a national effort demanding action to protect the sector which has been devastated by the impact of the coronavirus pandemic.

Three months of lockdown and ongoing restrictions over travel in efforts to stem the spread of Covid-19 have left the industry in what the union Unite has termed an "unprecedented crisis".

Three MPs - Paul Girvan and Sammy Wilson of the DUP as well as Stephen Farry of the Alliance Party - were among those who attended.

Unite regional officer George Brash said workers are "hugely frustrated" and called on British Chancellor Rishi Sunak to fulfil his promise in March of a bespoke package for aviation.

"Aviation in Northern Ireland is facing a tsunami of redundancies," he told the PA news agency.

He added that the demonstration is only the start of the union's campaign for Stormont to take action to safeguard airports, and protect regional connectivity and workers' jobs.

"What we are asking for local politicians to do is put pressure on Rishi Sunak to fulfill the promises he made.

"In July, he made a comment that there would be inevitable job losses, deadweight. Workers are not deadweight, they have the right to work. We are here to support them, support our airports and connectivity for Northern Ireland." 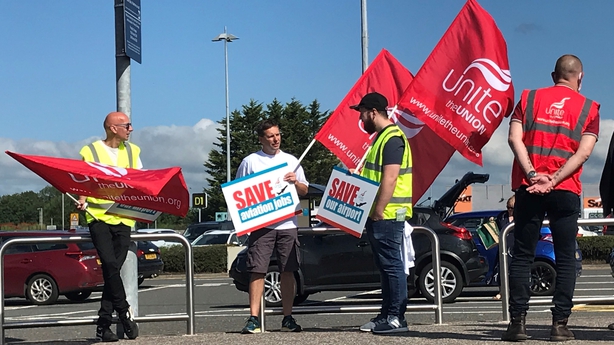 Paul Girvan insisted the DUP has been using whatever influence it has at Westminster to highlight the plight of the aviation industry.

The MP, who represents South Antrim where Belfast International Airport is located, said he does not feel that the hub has been treated fairly.

"The international airport plays a key role in the overall Northern Ireland economy and the growth of our economy is dependent on having connectivity with the rest of the outside world," he said.

"A small pocket of funding was given to the Northern Ireland Executive, and Belfast City Airport and the City of Derry Airport received some of that money but the international airport to date has received nothing.

"It is vital that we do have a fund which is going to support and sustain what we have here, which is a jewel in the crown of Northern Ireland."