Tánaiste Simon Coveney and Northern Secretary Julian Smith have published their proposals on restoring power-sharing at Stormont and urged all parties to support the plan.

Speaking in a news conference this evening, Mr Coveney and Mr Smith said the published proposals "provide a basis" to restore the Stormont Assembly.

The two men earlier briefed the DUP and Sinn Féin, before discussing details of the proposals with the three smaller parties - the SDLP, the Ulster Unionists and Alliance.

Mr Coveney said the document – titled 'New decade, New approach' – was a deal to get the Stormont Assembly back to work by the end of this week.

Mr Smith said he has asked the Speaker of the Assembly to reconvene it tomorrow and said it is now up to the parties to say whether they back the proposed deal. 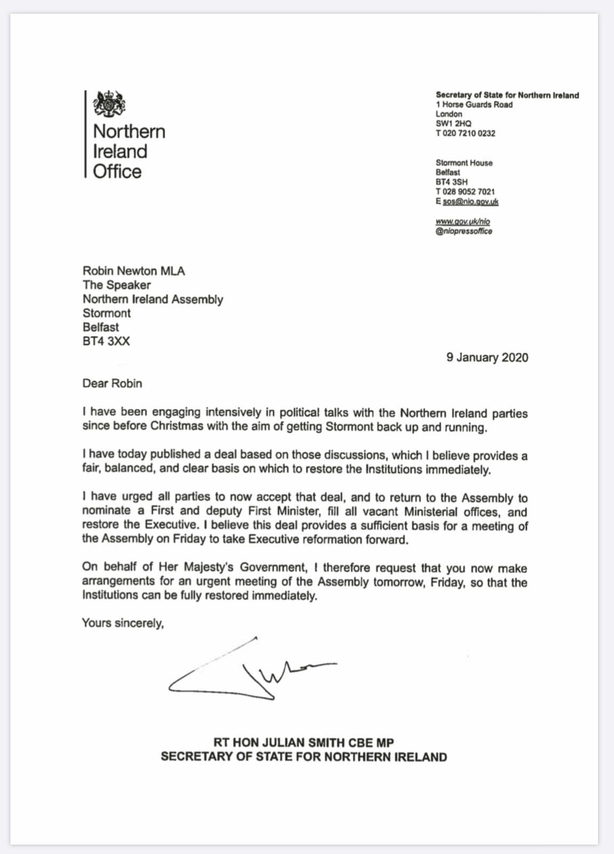 If either of the main parties decide they are not prepared to support what is being proposed by the two governments, it will cause a major problem.

DUP leader Arlene Foster has said she believes the proposals provide a basis upon which the Stormont Assembly can be re-established "in a fair and balanced way".

In a statement published on her party's website, Ms Foster said it is "not a perfect deal" and there will "always need to be give and take."

She added that elements of the paper will require further scrutiny.

Ms McDonald said Sinn Féin are "studying the text and will give it careful consideration". 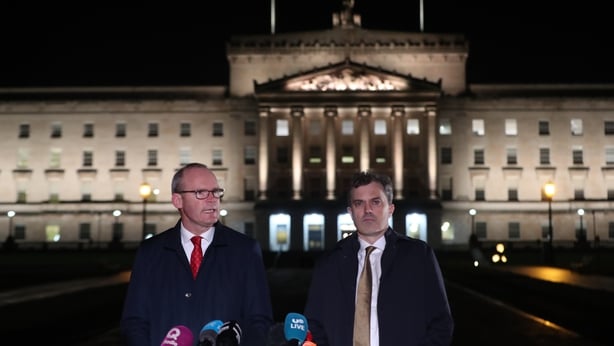 The Stormont proposals: What is outlined in them?

The leader of the UUP, Steve Aiken, also said that his party will consider the proposals carefully and "consult widely within our party before making any further comments".

Mr Aiken added that if the Assembly is recalled tomorrow then the UUP MLAs will "attend and consider the business put before them".

Mr Smith and Mr Coveney would prefer to have a power-sharing executive with all five parties involved, but if either the DUP or Sinn Féin decide to not back the deal, the formation of a government would not be possible.

BREAKING: Irish + British governments @simoncoveney + @JulianSmithUK say they believe they have basis for agreement to restore Stormont Assembly.  Now up to N Ireland's 5 main parties to say whether they back proposed deal @rtenews @RTENewsNow pic.twitter.com/KKC15aVz9x

Mr Smith has indicated that if an agreement is not in place by Monday 13 January, he may call fresh Assembly elections.

He said not all documents are agreed yet on by all parties, but said he believed they had a deal that all in Northern Ireland could get behind.

He also said there was a finally a deal on the table that all parties could support to enable the restoration of the executive before the weekend, and he urged all parties to return to Stormont tomorrow.

He said it was also important to remember the murder of journalist Lyra McKee, whose death led to the drive to get talks towards power-sharing back up and running.

The Tánaiste added: "I want to urge all political leaders and their teams to grab this opportunity and get back to work in a multi-party executive.

"Forget the language of win and lose, this is a deal filled with compromises, they are fair compromises, but most importantly, they are compromises in the interests of all the people in Northern Ireland." 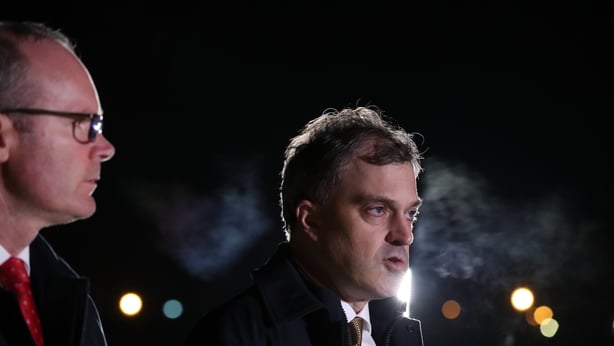 Mr Smith described the document as relatively short, but said the path to get here was a lot longer, and longer than the public could reasonably expect.

He said it was the result of many months of hard work by the two governments and represents a fair and balanced deal for all the citizens of Northern Ireland.

The Northern Secretary said the deal means the Stormont Assembly can get back up and running tomorrow, and said it guarantees the Good Friday Agreement is protected and is respected.

Mr Smith said as new challenges present themselves, new compromises need to be found, and this deal enables that the journey from peace to power-sharing to prosperity can continue.

He said the parties and the governments have worked for many months in the spirit of compromise and said he believed there was something in this new deal for everyone and hoped everyone could support it.

Today marks the third anniversary of the collapse of power-sharing as the result of a row between Sinn Féin and the DUP.