The Irish and British governments are poised to make public a proposed deal to restore power-sharing at Stormont as they urge politicians to sign up.

There is an expectation the document will be tabled to the parties at some point tomorrow.

It is understood the proposals will then be published more widely, either tomorrow or later in the week.

The planned timetable had still to be confirmed this evening as Tánaiste Simon Coveney and Northern Secretary Julian Smith held talks to discuss the text.

They were expected to be involved in lengthy discussions through the evening.

Publishing a draft text prior to securing a deal among the parties would represent a new approach for political negotiations in Northern Ireland.

If the document is made public tomorrow, offering voters the chance to assess what compromises are on offer, it would coincide with the latest strike action by workers in the region's crisis-hit health service.

Nurses will be on the picket lines in an ongoing protest over pay and staffing shortages.

Proposed legislative protections for Irish language speakers and reform of a contentious Stormont voting mechanism called the petition of concern are the key issues at the heart of talks to restore power-sharing three years after it imploded.

DUP leader Arlene Foster has said all the main Stormont parties were in the space where they wanted to deliver a deal.

The DUP leader said her party stood ready to sign up to agreement, if "fair and balanced" resolutions to the outstanding issues were achieved.

"I do think a deal is possible," said Ms Foster.

"It should be a deal, as I have said all along, that is fair and is balanced and I hope that is what we can achieve."

Earlier, the Sinn Féin leadership briefed a meeting of party representatives on the state of negotiations.

Ms Foster said once her party had sight of the governments' text, she and colleagues would assess whether it addressed their concerns on the outstanding issues.

"I think everybody is in the space where they want to do a deal, let's get down, let's focus and make sure we do that deal," she said.

Asked about reports of angry exchanges during a meeting of the party leaders yesterday she denied relations had deteriorated, and claimed things had been blown out of proportion by the media.

"I hope that we can reflect that in the work that we do, if and when we get an executive back up and running again," she added. 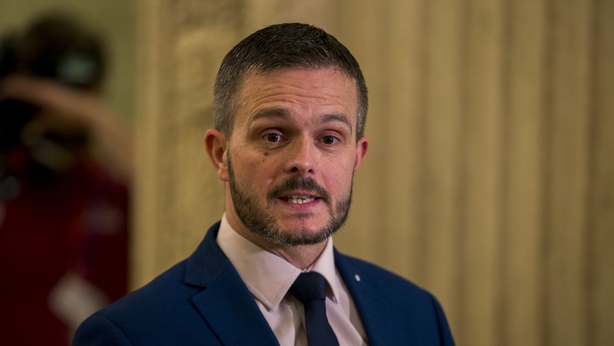 "There really does need to be a refocusing of minds and a more concerted effort to get these talks to a conclusion," he said.

"The problems and difficulties are well rehearsed. There have been three years of intensive and non-intensive talks and, as we can see today, there is no real intensity. We would like to see that stepped up within the next 24 hours."

Mr Butler said parties needed to get into power-sharing to address a range of urgent social problems, including what he described as a "mental health epidemic", citing a recent spate of suicides in the region.

Sinn Féin has demanded a stand-alone Irish Language Act as a prerequisite of any deal to restore devolution.

The DUP has expressed a willingness to legislate to protect the language, but only as part of broader culture laws which also include the Ulster Scots tradition.

So the dispute essentially boils down to whether new laws are contained in a stand-alone bill or as part of a wider piece of legislation.

Another important factor is the amount of additional Westminster funding Mr Smith can secure to oil the wheels of any proposed deal.

He travelled to London yesterday to update British Prime Minister Boris Johnson on the state of negotiations.

Given the scale of the challenges facing any new Stormont administration in high-expenditure areas including health, education and gaps in infrastructure, the Northern Ireland secretary will be expected to provide significant new resources.

The DUP often stated that its Confidence and Supply Arrangement that kept Theresa May’s Conservative Party in power was worth in excess of £1bn to Northern Ireland.

That Tory-DUP deal may be cited as a yardstick in any package Mr Smith brings to the table in the ongoing discussions at Stormont.