A service commemorating the British army's deployment in Northern Ireland has taken place.

Veterans from around the UK are attending the event near Belfast, close to the army's Lisburn headquarters in Northern Ireland.

Hundreds of ex-servicemen attended, including those from the Royal Engineers and the Parachute Regiment.

A group of ex-service men on bikes, calling themselves the Legion Riders, wore leathers decorated with airbrushed scenes from the Battle of Britain and the Somme.

When the army first deployed in 1969, the intention was a short intervention.

By 2005 when it ended, Operation Banner had become the British army's longest continuous deployment.

DUP leader Arlene Foster and widows bereaved during the Troubles were among those to attend. 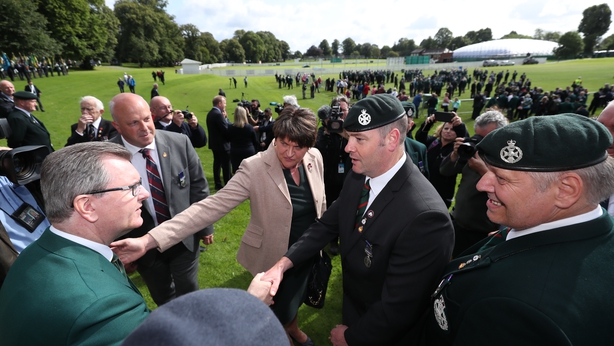 A former commanding officer said the investigation of soldiers over alleged wrongdoing during the Troubles is "unfair".

Robert Pascoe led Operation banner from 1985 to 1988 and told today's ceremony that the "current process is unfair and we look to our politicians to sort it out without delay." He said soldiers had faced legal action, there had been public protests against historical investigations and "exaggerated" stories of bias against the army by PSNI detectives which were not borne out by the number of cases investigated.

He said with the appointment of veterans minister Johnny Mercer he hoped they could see a way out of the "distressing" situation.

He urged veterans to seek advice if they became involved.

He added that troops were first deployed to protect people in the Catholic community in Derry and "some people remember those early days, when tea and cakes were on offer.

"But the honeymoon period did not last long and we were soon engaged in a seemingly endless and bitter struggle against the IRA and their supporters."

More than 20,000 soldiers were in Northern Ireland at the peak of the deployment.

The retired officer added: "It was our job to hold the ring to limit the attacks by the terrorists and sap their will to continue the fight, this you did."