The Harland and Wolff shipyard, once the largest producer of ocean liners, faces an uncertain future despite being Belfast's largest employer for decades.

Harland and Wolff Shipyard was founded in 1853 by an ironmonger, Robert Hickson.

It was sold to his manager, Edward Harland, in 1855. He was financed by GC Schwabe of Liverpool, whose nephew Gustav Wolff joined the firm as Harland's assistant.

The first ship launched was the Venetian, followed by transoceanic liners for the White Star Line such as the Britannic, Olympic and Oceanic.

The most famous of the ships built by Harland and Wolff was the Titanic, the ship that met its demise in the North Atlantic. A collision with an iceberg saw more than 1,500 die.

The world's largest ocean-liner was the pride of British maritime technology when it left the city's harbour in May 1911.

The liner was unprecedented in size. Three million rivets were used to bind its hull together.

Around 3,000 men spent two years building it in the gilded years before World War I.

It was the height of engineering prowess. The shipyard where it was assembled had a reputation as the world's leading liner builder.

Its passengers were among the scions of British and US society and the sinking was to send shock waves around the world.

The shipyard went on to play a major part in the industrial effort behind the Great War.

After the war, the ship building industry suffered an economic slump and the numbers employed at Harland and Wolff fell significantly.

The Wall Street Crash led to the failure of its closest rival in Belfast. Harland and Wolff survived by changing the design of its ship.

World War II was to represent boom time for Belfast.

The yard was the only shipbuilder on the city's River Lagan and prospered amid the unprecedented demand for war materiel.

Employment rocketed and Harland and Wolff supplied almost 150 warships, as well as tanks and guns, when rearmament in Britain surged to counter an existential Nazi threat.

German air raid bombings known as the Belfast Blitz in April 1941 inflicted heavy damage equating to around half the sprawling industrial giant's yards on reclaimed land near the river.

Harland and Wolff survived and thrived in the immediate post-war years as shipping companies needed to restore their vessel numbers.

It launched the Canberra in 1960 and was still among the world's leading shipbuilding names.

With the onset of the Northern Ireland conflict in 1969 and shifts in global production towards lower cost economies, the industry slowly declined. 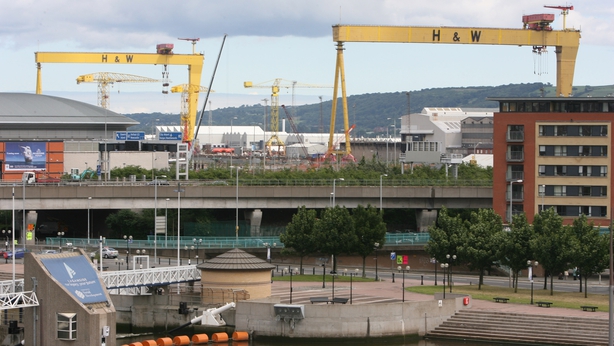 In January 2003, the last vessel fully built in Belfast, the Anvil, was launched.

In recent years, the yard has diversified into projects such as cruise liner refits and wind energy.

From once employing more than 30,000 people during Belfast's industrial heyday, the workforce only numbers around 125.

They face an uncertain fate.