The first results in the local government elections in Northern Ireland have been announced, with Alison Bennington, the DUP's first openly gay candidate, among those elected.

She attracted 1,053 votes to win a place on Antrim and Newtownabbey Borough Council.

Elsewhere, Anne McCloskey made history by becoming the first Aontú candidate to be elected on the Derry City and Strabane District Council.

Meanwhile, the son of prison officer David Black has been elected to the Mid Ulster Council.

Kyle Black ran as a candidate for the DUP in the Carntogher electoral ward.

His father David, 52, died following a motorway drive-by shooting in Co Armagh in November 2012 while on his way to work.

Other councillors to win seats across the 11 council areas include Sinn Féin's Darren Totten, the DUP's Clement Cuthbertson and Independent Barry Monteith.

Ballot boxes were opened in count centres at 8am at the start of a two-day count.

A total of 819 local council candidates are standing for 462 available seats across the 11 council areas.

Indications from some of the 1,463 polling stations across the country suggest a solid turnout, with good weather appearing to have buoyed numbers casting their ballots. It was the first time in more than 20 years that a council election was held on its own, and not in conjunction with another poll.

The official turnout figure in the last council election in 2014, which was held at the same time as the European election, was 51%.

The verification of unused ballot papers was conducted overnight ahead of the main counts.

Counting continues through today and is scheduled to resume tomorrow, when the final picture will begin to emerge. 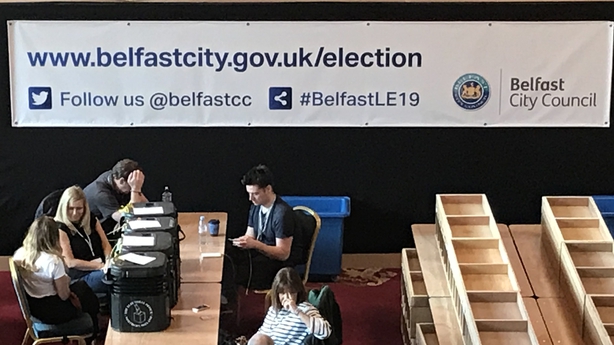 Among noteworthy races for seats will be Sinn Féin's former West Tyrone MP Barry McElduff's efforts to return from the political wilderness.

He was forced to step aside after offending the families of those shot dead by republicans at the height of the Troubles in Kingsmill, Co Armagh.

Mr McElduff is running for a place on Fermanagh and Omagh District Council in the far west.

It is the first poll since journalist Lyra McKee, 29, was shot dead by dissident republicans during disturbances in Derry last month.

Her death prompted revulsion against the group blamed for the killing and a call by a Catholic priest for politicians to redouble efforts to restore power-sharing at Stormont.

The Assembly and Executive have been suspended since early 2017.

The last DUP/Sinn Féin-led power-sharing coalition collapsed amid a row about a botched renewable energy scheme.

The rift subsequently widened to take in disputes over the Irish language, same-sex marriage and the legacy of the Troubles.

Fresh negotiations are due to begin next week following Ms McKee's death.