An area of west Belfast where a prominent police station once stood has been named after two local women who campaigned against the use of plastic bullets.

Located on the site of the former Andersonstown RUC Station, Groves Reilly Corner has been renamed in honour of the late Emma Groves and her friend, 80-year-old Clara Reilly.

Ms Reilly, a married mother of six, is chairwoman of Relatives for Justice.

She established the first monitoring organisation of alleged human rights infringements by the security forces during the earliest days of the Northern Ireland conflict. 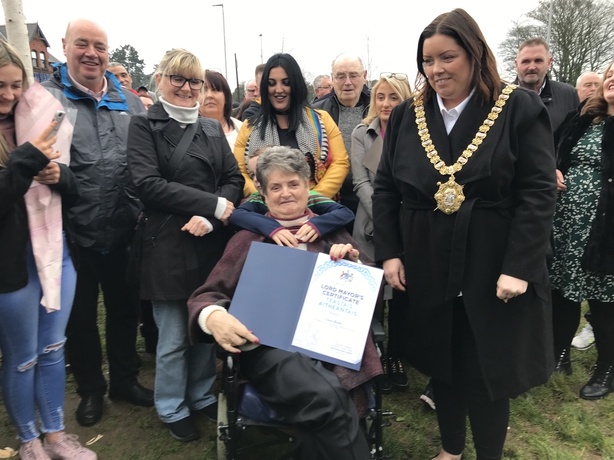 Her friend Ms Groves was blinded by a security force plastic bullet in 1971.

The two women founded the Association for Legal Justice in the early days of the Troubles.

Andersonstown was where one victim, John Downes, was killed by the RUC with a plastic bullet in 1984.

This sparked the women to found the United Campaign Against Plastic Bullets.

Mark Thompson, director of Relatives for Justice, described the renaming of the site in honour of the women as a "proud day".

"It is a positive day for two wonderful lives who refused to be overshadowed by horrific events that impacted them in the worst imaginable way," he told those gathered.

"When Emma Groves and Clara Reilly stood and spoke up, they commanded attention - it was because they were right and had right on their side.

"They refused to remain silent in the darkest days and harshest of times, they are our champions, the people's champions."

Mr Maskey, Mr Adams and Ms Hargey each paid tribute to the two women in speeches. 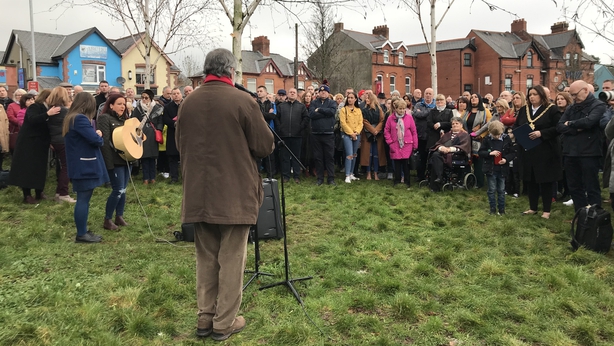 Ms Hargey went on to present Ms Reilly with a certificate in recognition of the moment and her lifetime advocating for the community.

Speaking ahead of the ceremony Ms Reilly said she was honoured.

She said: "I was doing this since 1969 and I would do every minute of it again.

"It is our history and what the nationalist people suffered, and I was not prepared to take it lying down.

"I thought you had to speak out no matter what."