A Northern Irish couple, who scooped a €130m New Year's Day EuroMillions jackpot, have been named as Frances and Patrick Connolly.

Speaking to the media, the couple, who are in their 50s, said when they found out they had won the jackpot they had "a cup of tea and a hug".

The couple, who rent a house in Moira, Co Down, are regular Lotto players, but only normally bought tickets for EuroMillions when there was a big jackpot.

He said he checked the results on his laptop later that night and then turned to his wife and said: "I think I've got some good news for you."

Mrs Connolly said that when she saw her husband was looking at the lottery she realised they must have won something.

The couple went public with their news at the Culloden Hotel in Co Down this morning.

She said that while they had often speculated about what they would do if they won the lottery, a win this size was not something they had thought about.

She said they already had a list of around 50 people that they will be taking care of with their winnings.

The couple, who have been together for 30 years and have three grown up daughters - one aged 30 and 24-year-old twins and three grandchildren - two boys and a girl - are still deciding how to treat themselves.

One twin is in New Zealand doing a Masters degree. She will be travelling home and, during her stopover, has upgraded from a hostel to a modest hotel. 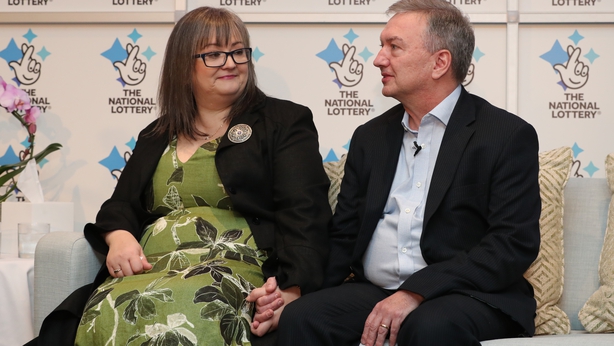 Mrs Connolly, 52, said: "This is a massive sum of money and we want it to have a huge impact on the lives of other people we know and love as well as on our future too.

"This win gives us the chance to really make a difference for our family and friends.

"I always hoped we would win the lottery one day, but when we did, it would be just our luck that lots of others would win on the same day with the same numbers too - never in my wildest dreams did I think we would ever win almost £115 million."

The couple said they sat in silence after they had realised they won, struggling to take it in.

Mr Connolly said: "We really didn't know what to do or how to react and we didn't sleep a wink that night. We rang Camelot at 8am in the morning to verify the win.

"Then it started to dawn on us that it was true even though it still hasn't really sunk in."

The couple said while they would have preferred to have kept the win silent, there were just too many people they wanted to share the win with to have kept it a secret.

Mrs Connolly, who said their ticket was a lucky dip (quick pick), insisted the win would not change them as people.

But, she said, deciding how far to spread their good fortune would be tough.

"I'm going to cry myself to sleep that I can't help everybody. That will be really tough."

Mrs Connolly said she was going to spend some of the money to support a local community football club in Hartlepool she used to work with, St Francis FC.

The couple lived in Hartlepool for 25 years.

Asked whether she would have to increase her personal security, Mrs Connolly joked: "I've never met anybody I couldn't take down myself, to be fair."

Noting her leg injury, she indicated a huge mansion was not on the cards. "I want a bungalow because I can't walk up the stairs," she said.

Mr Connolly paid tribute to his "wonderful" wife and family.

"This is the icing on the cake." 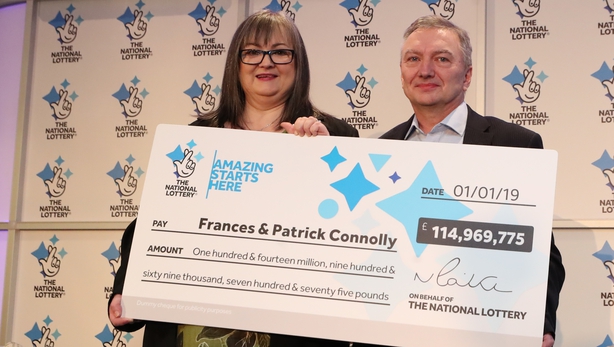 Mrs Connolly said they had always been happy but the win would make them a "hell of a lot happier", adding that they would travel and help people in the community.

She added: "I cannot see us being in the limelight for a long time.

"There are no skeletons, there are no dirty pictures, there is not enough to keep us in the public eye."

Last January a winning €38.9m EuroMillions ticket was sold in The Village Shop in Malahide in Dublin and in June a syndicate of workers from a hardware shop in Thurles, Co Tipperary, won €17m.

A Dublin work syndicate claimed an €88.5m EuroMillions jackpot in January 2017, while a west of Ireland syndicate scooped almost €29m in July that year. 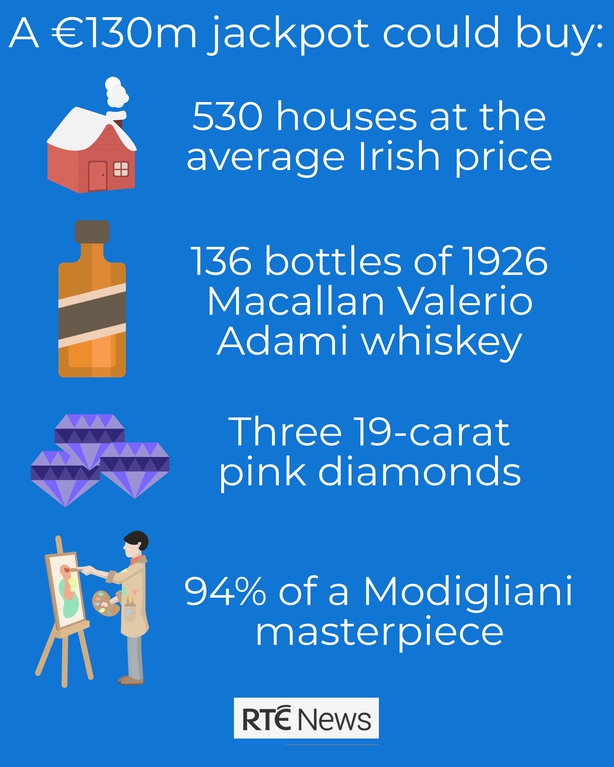