A former British soldier has apologised to the family of a man he shot dead in "a mad 30 seconds" in Belfast almost 50 years ago during a new inquest into his death.

The ex-Royal Engineer, who has been granted anonymity, was giving evidence at Belfast Coroner's Court during an inquest into the death of Eddie Doherty, 31.

The father of four died after he was shot in Ballymurphy on 10 August 1971.

Referred to as M3, the former soldier insisted he fired the shot because he believed his life was in "immediate danger".

Giving evidence from behind a screen visible only to Mr Doherty's family, M3 said he wished he could turn back time.

"I can't even begin to think how it affected them, horrendous," he said.

"I just can't believe, I just can't understand how ... for a mad 30 seconds to last a legacy like this.

"Me, I just like to soldier on, I just feel that if I could turn back time ... I am sorry, I still get emotional (about this)."

The incident came during several days of shootings from 9-11 August in the west of the city.

Ten people died in what has become known as the Ballymurphy massacre.

The shootings took place as the British army moved in to republican strongholds to arrest IRA suspects after the introduction by the Stormont administration of the controversial policy of internment without trial.

In a statement to the Coroners Service, which was read to the inquest, M3 recalled a hostile crowd throwing missiles on 10 August as he attempted to clear a large street barricade on the Whiterock Road.

M3 said he saw a man throw two petrol bombs at his tractor and had been preparing to throw a third when he fired a single shot and saw the man fall.

"I was shooting at the upper chest to kill because I believed my life was in immediate danger," he said in the statement.

When asked whether it was possible the bullet he fired had not hit the man he saw with the petrol bomb, but someone further back, where Mr Doherty's family said he had been, M3 said "there is always that possibility".

M3 said now knowing the man had a wife and children is "what upset me most about it ... I still think about that and it upsets me to this day". 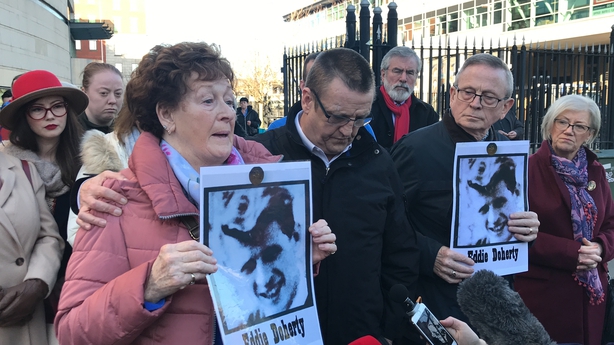 Meanwhile the statement also includes a claim by M3 that he had fired a burst of four shots at a gunman running on nearby waste ground.

M3 lost consciousness shortly after receiving a blow to the head when a missile struck his tractor.

He was not seriously injured.

Mr Doherty's family have insisted that he was an innocent bystander.

They have expressed determination to "clear his name".

Fresh inquests were directed into the deaths of ten people at Ballymurphy following claims that the original coronial probes were inadequate.

They are the latest in a series of new inquests into incidents which took place during The Troubles.