The families of ten people who were killed in gunfire during three days of shootings in west Belfast in 1971 gathered outside a court in Belfast as fresh inquests opened.

Family members held pictures of the victims outside Laganside Court in the city.

John Teggart, whose father Danny was one of those killed, said: "It's mixed emotions going into court today but the determination of the families to get to the truth has brought us to here.

"We will continue this fight."

In 2011, Northern Ireland's Attorney General John Larkin directed that new inquests be heard after a long campaign by family members, who claimed the original coronial probes in the aftermath of the shootings were inadequate. 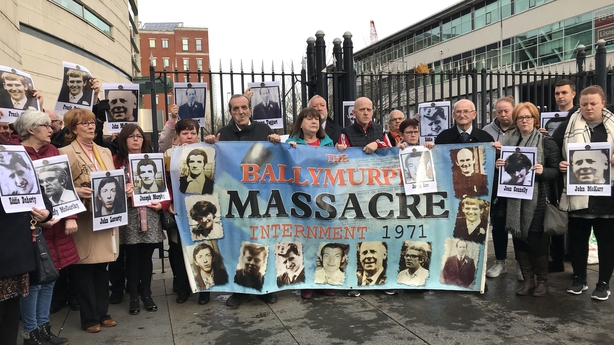 Briege Voyle, whose mother Joan Connolly, 44, was one of ten people killed in the incident, expressed hope that a long-awaiting inquest could deliver truth.

"We've waiting this long for it to come, it's a wee bit hard to believe that it's actually happening, but at the same time we are just so glad that it's here," she said.

"We think that after 47 years we are going to get some form of truth."

Sean Doran QC, counsel for the Coroner's Service, detailed the evidence that will be examined throughout the inquests.

He described the process into these inquests as "difficult and complicated".

He added that the difficulties have been exacerbated by the loss of records including statements from military witnesses which they gave before the original inquest.

A Catholic priest was among the 10 people fatally injured in the shootings, involving members of the British Parachute Regiment.

Another man died of a heart attack following an alleged violent confrontation with the troops in the west Belfast estate.

The shootings took place as the Army moved in to republican strongholds to arrest IRA suspects in the wake of the introduction by the Stormont administration of the controversial policy of internment without trial.

Soldiers have long been held responsible for killing all 10 people in Ballymurphy between 9 August and 11 August 1971, but the accepted narrative became clouded earlier this year when former members of the paramilitary Ulster Volunteer Force came forward to claim their organisation was also involved.

Mr Doran said the court will examine a period of time in Belfast when there were approximately 12 explosions, 59 shootings, 17 deaths, 25 injuries, 13 rioting incidents, 18 arson attacks and numerous reports of civil disorder.

"When examining the deaths through a forensic lens we ought not to lose sight of the context of when these deaths occurred," he said.

"That is not to say however that the context provide shield or buffer against scrutiny."

The families of the ten victims who were killed in 1971 gathered outside Laganside Court in Belfast ahead of the inquests.

Family members held pictures of the victims and banners calling for justice.

John Teggart, whose father Daniel was one of those killed, said before court: "It's mixed emotions going into court today but the determination of the families to get to the truth has brought us to here."

"It's a tribute to the adversity and resilience of these brave families, so I want to commend them through all the difficult days.

"Hopefully this is a new start of a process to find out what happened to their loved ones.

"Over the next few months the court will examine the evidence and we are very confident that their loved ones' innocence will be clear and their names will be cleared, finally."

Evidence in the first inquest will be heard in the week commencing 28 November.