There are fears that a historic building in Belfast city centre may collapse after it was gutted by a major fire.

Michael Graham, assistant chief fire and rescue officer, expressed "concerns" over the structural integrity of the building, with part of it "prone to collapse" and said a 30-metre cordon had been established for that reason.

He said he did not know what caused it, nor whether there were fire alarms or sprinklers in place. Nobody was injured. 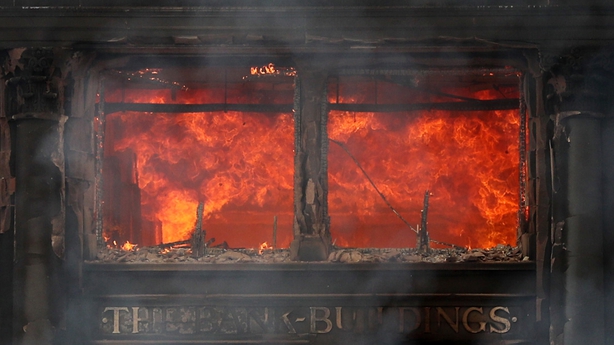 The building, which has been in the heart of Belfast since 1787, had recently undergone a multimillion-pound refurbishment with a 2,700 square metre extension, added to the premises.

Primark shoppers and staff were evacuated from the building at around 11am after smoke could be seen billowing from the roof.

Flames reaching at least 50ft could be seen right across Belfast's skyline.

The historic clock at the top of the building was engulfed in flames before the fire spread from the roof to the floor below.

Parts of the roof collapsed as thick black smoke and fire then ripped through the rest of the flagship store.

The building has survived bombs and fires throughout its long history in the city. 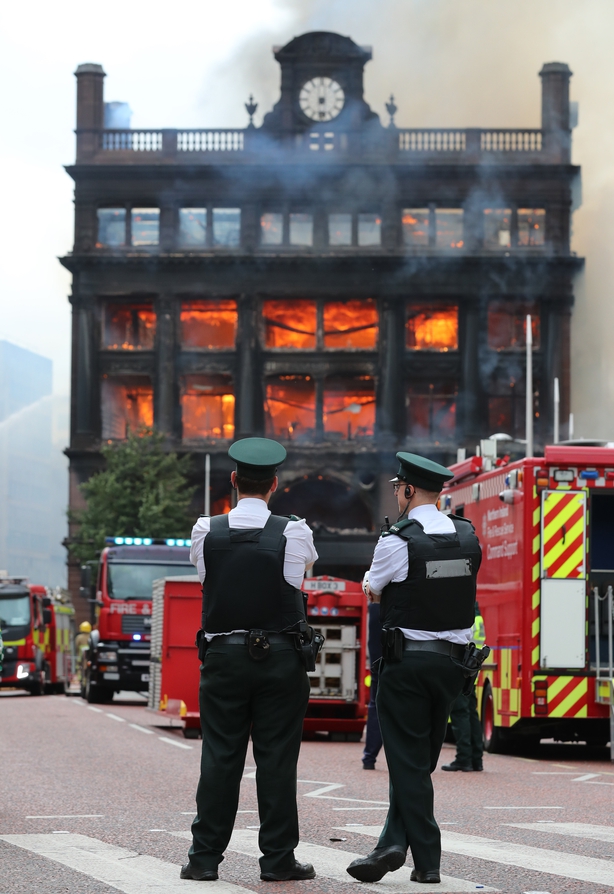 Work to complete the bigger store was to be completed by the end of the year.

Primark is owned by the Penneys brand.

The fire will have an impact on hundreds of jobs at Northern Ireland's largest Primark store.

Hundreds of members of the public were removed from the area as police closed roads and diverted traffic to allow firefighters to tackle the blaze.

Loud bangs could be heard coming from the fire, while large pieces of debris were seen falling from the building.

In a statement, Primark CEO Paul Marchant said the company is "deeply shocked and saddened by the fire" and "would like to thank the emergency services for their swift response and ongoing actions."

The statement added: "We would like to reassure our customers, colleagues and the wider community in Belfast that we are committed to working with the authorities and our building contractors to establish the cause of the fire."

"We are working closely with our team in Belfast to ensure they are fully supported during this challenging period." 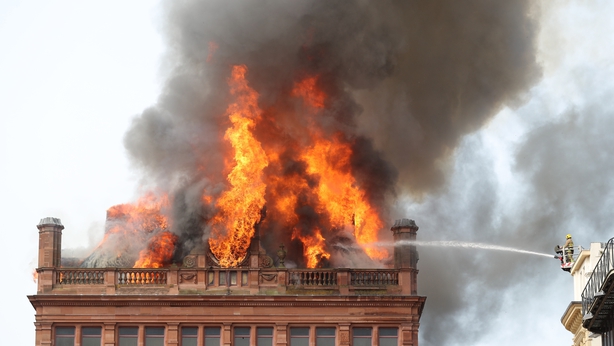 He added: "The emergency services deserve credit for handling a very difficult situation in such a big store in a busy city centre without any reported injuries.

"This is a very concerning development, both for Primark and the city centre as a whole.

"Primark is a major attraction for Belfast and provides considerable footfall for surrounding traders.

"I hope that the store will reopen again in the near future."

Joan McCoy, president of the Royal Society of Ulster Architects (RSUA), said: "Thankfully there are no reports of any injuries arising from this major fire but it is a sad day for Belfast.

"Buildings like these help give Belfast its unique identity and character.

"The Bank Building is a very important part of the city's architectural heritage and is loved by many.

"This building has survived bombs and fire before. We can only hope that the damage is not too severe and that the building can be saved."

Michael Graham, assistant chief fire and rescue officer with Northern Ireland Fire and Rescue Service (NIFRS), said they would continue to deal with the fire into the evening and potentially overnight.