Thirteen people have been hospitalised after a suspected ammonia gas leak in Kilkeel, Co Down.

The Northern Ireland Fire and Rescue Service were alerted to the suspected leak at Harbour Road in the town at 12.38pm.

Paramedics and the air ambulance were sent to the scene and 13 people were taken to Daisy Hill Hospital for treatment.

Two people are being kept in hospital overnight as a precautionary measure. The remainder are expected to be discharged after being medically assessed.

The incident happened at Young's fish processing factory in the town.

A major incident was declared, but has since been stood down. 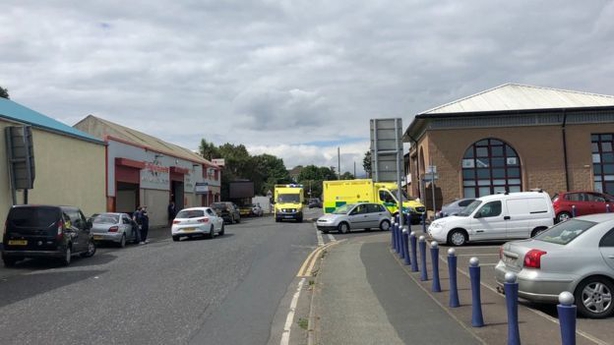 Two people were given oxygen by firefighters before ambulance crews arrived at the scene.

A number of other people in the area were also assessed by NIAS at the fishing port.

The casualties were then transferred to hospital.

The cause of the leak has been isolated and the site was surveyed by firefighters with gas monitors to check for the presence of ammonia gas. All readings were zero.

A spokesman for the Northern Ireland Fire and Rescue Service said: "The cause of the leak had been isolated prior to the arrival of Fire Crews.

"Firefighters wearing breathing apparatus surveyed the site with gas monitors to check for the presence of ammonia gas - all readings were zero.

"Firefighters gave oxygen therapy to two casualties prior to the arrival of Ambulance crews. Fire Crews from Kilkeel, Newcastle and Warrenpoint Fire Stations remain at the scene.

"Daisy Hill Hospital requested NIFRS to stand by to provide support in receiving casualties if required. At this stage no action has been required.

"There is no risk to the public from this gas leak."