Ukraine has hinted at responsibility for new explosions at a military base in the Russian-annexed Crimea region that is an important supply line for Russia's invasion.

The blasts engulfed an ammunition depot at a Russian military base in the north of the peninsula.

It disrupted trains and forced the evacuation of 2,000 people from a nearby village, according to Russian officials and news agencies.

Plumes of smoke were later seen at a second Russian military base in central Crimea, Russia's Kommersant newspaper said, while blasts hit another facility in the west last week.

The explosions raised the prospect of new dynamics in the six-month-old war if Ukraine now has capability to strike deeper into Russian territory or pro-Kyiv groups are having success with guerrilla-style attacks.

Russia has used Crimea, which it annexed from Ukraine in 2014, to reinforce its troops fighting in other parts of Ukraine with military hardware, a process Kyiv is keen to disrupt ahead of a potential counter-offensive in southern Ukraine.

Crimea is the base of Russia's Black Sea Fleet and also popular in the summer as a holiday resort.

In today's incident, an electricity substation also caught fire, according to footage on Russian state TV.

Russia's RIA news agency said seven trains were delayed and that rail traffic on part of the line in northern Crimea had been suspended.

Ukraine has not officially confirmed or denied responsibility for explosions in Crimea, though its officials have openly cheered incidents in territory that, until last week, appeared safe in Moscow's grip beyond range of attack.

After today's blasts, Ukrainian presidential adviser Mykhailo Podolyak and chief of staff Andriy Yermak both exulted on social media at "demilitarisation": an apparent mocking reference to the word Russia uses to justify its invasion.

"Operation 'demilitarisation' in the precise style of the Armed Forces of Ukraine will continue until the complete de-occupation of Ukraine's territories. Our soldiers are the best sponsors of a good mood," Mr Yermak wrote on Telegram.

Russia's defence ministry said the explosions at the ammunition depot were "a result of sabotage".

Putin accuses US of trying to 'prolong' war in Ukraine

Meanwhile, Russian President Vladimir Putin has accused the United States of drawing out the war in Ukraine.

"The situation in Ukraine shows that the US is trying to prolong this conflict," Mr Putin said, addressing the opening ceremony of a security conference in Moscow.

Washington is "using the people of Ukraine as cannon fodder", he said, lashing out at the US for supplying weapons to Kyiv.

His comments come as the first UN-chartered vessel laden with grain left Ukraine for Africa following a hallmark deal brokered by Turkey and the UN to relieve a global food crisis.

Russia invaded Ukraine in February, anticipating little military resistance and hoping for a lightning takeover that would topple the government in Kyiv within hours.

But after failing to capture the capital, Russia's military instead has become entrenched in a protracted bout of attrition with the sprawling front line in the east and south.

The US has provided key economic and military backing to Kyiv, in particular supplying Ukraine with long-range, precision artillery that has allowed it to strike Russian supply facilities deep inside Moscow-controlled territory.

With the war raging since 24 February, attention has also focused in recent days on shelling in the vicinity of the Zaporizhzhia nuclear reactor complex, Europe's largest, in a Russian-occupied area of southern Ukraine.

Russian-installed officials there, quoted by Interfax news agency, said today that Ukrainian forces were shelling the city of Enerhodar where the plant is located. They accused Ukraine of doing so to provoke Russia into returning fire.

Each side has blamed the other for heightened risks to Zaporizhzhia, which Russia seized in March though Ukrainian technicians continue to operate it.

The region's governor, Oleksandr Starukh, said up to 400,000 people would need to be evacuated in the event of an accident, and UN Secretary General Antonio Guterres has called for the area around the plant to be demilitarised.

Meanwhile, in the eastern Donbas region, which has seen most of the fighting, Ukraine said Russia had launched a "massive" offensive from an oil refinery in the recently-captured city of Lysychansk in Lugansk province.

Ukraine's presidency said one woman was killed and two more injured in Donetsk province, which together with Lugansk makes up the industrial Donbas that is now mostly controlled by Russian forces.

Kyiv and Moscow have also traded accusations over a series of strikes this month on Zaporizhzhia nuclear plant in southern Ukraine - Europe's largest.

On Monday, Ukrainian President Volodymyr Zelensky warned a "catastrophe" at the Russian-controlled facility would threaten the whole of Europe. 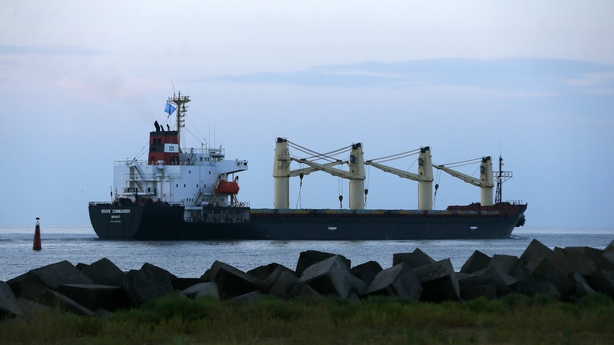 On the Black Sea, the UN-chartered vessel departed today from the Ukrainian port of Pivdennyi and will sail to Djibouti "for delivery to Ethiopia", Ukraine's infrastructure ministry said.

The MV Brave Commander, loaded with 23,000 tonnes of wheat, was able to leave after a deal agreed last month lifted a Russian blockade of Ukraine's ports and established safe corridors through the naval mines laid by Kyiv.

Ukraine has said it is hoping there will be two or three similar shipments soon.

Russia's invasion has driven an economic, political and cultural wedge between Moscow and European capitals.

The prime minister of Estonia, which was formerly Soviet-ruled, said today that her government had decided to remove all Soviet-era monuments from public spaces in the country.

"As symbols of repressions and Soviet occupation they have become a source of increasing social tensions - at these times, we must keep the risk to public order at a minimum," Kaja Kallas wrote on Twitter.

The move follows similar trends in Poland and Ukraine, which began tearing down statues of Soviet leaders in earnest after Russia-backed separatists wrested control of swathes of the east in 2014.