Residents in the Ukrainian city where a missile strike on a crowded shopping centre that killed at least 20 people have dismissed the Russian army's version of events as "absurd".

Dozens were injured and many are still missing after the strike set off a blaze inside a mall in Kremenchuk yesterday.

The Russian army claimed today it had hit a nearby weapons depot with the explosion sparking the blaze at the shopping centre, which according to Moscow was "not operational" at the time.

But several Kremenchuk residents interviewed by AFP said they had not heard of arms being stored in the area. "We heard that, it's absurd," said Polina Pushintseva.

"When you live here, I wonder how you can believe such things that are pure invention," she added. A 10-minute walk from "Amstor" shopping centre is a factory that makes construction machinery. AFP journalists visited there today and found that one of its buildings had been destroyed, while others remained intact. No military equipment could be seen.

Ukraine's President Volodymyr Zelensky called for the United Nations to visit the site of the missile strike in Kremenchuk, as he addressed the UN Security Council today.

Speaking by video from Kyiv and clad in a trademark olive green shirt, the Ukrainian leader also called on members of the Council - including Russia - to hold a minute's silence for those killed in the war so far.

All 15 Security Council members, including Russia, stood for a moment of silence. 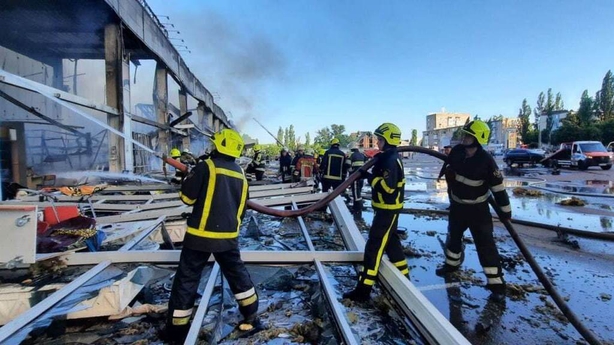 "I suggest the United Nations send either a special representative, or the secretary-general of the United Nations... so the UN could independently find out information and see that this indeed was a Russian missile strike," Mr Zelensky said.

And he asked the UN to legally define the term "terrorist state," arguing that Moscow's invasion of his country on 24 February demonstrates "the urgent necessity to enshrine it, literally, at the level of the United Nations and punish any terrorist state."

Prior to the emergency UN session, France, Ireland, Norway, Britain, the United States and Albania, as well as Ukraine's ambassador issued a joint statement.

In this, they said they "strongly condemn the intensification of Russian missile strikes on the territory of Ukraine, targeting residential areas and civilian infrastructure, over the period of 25-27 June 2022."

That included the strike on the shopping mall, which they called a "blatant attack" on civilians. They demanded Russia immediately cease hostilities and withdraw from Ukraine. 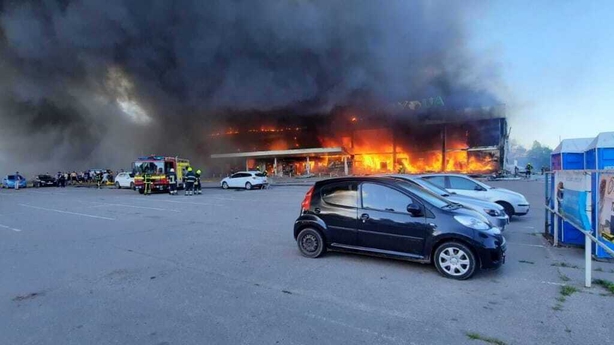 Clearing operations were halted for more than an hour today in Kremenchuk as air raid sirens sounded across the central Ukrainian city.

Four large cranes were deployed at the site to lift pieces of heavy metal and gather debris, with fire trucks, rescue vehicles and several army trucks lined up in the mall's parking lot.

In a fire of such intensity, "you have no chance of surviving", said Ivan Melekhovets, a commander of a fire brigade which took part in the rescue operation.

"The hardest thing is to see the corpses - adults, children," he told AFP, adding that they were still looking for between 50 and 60 missing people.

Moscow calls its invasion a "special military operation" to rid Ukraine of fascists, an assertion the Kyiv government and Western allies say is a baseless pretext for an unprovoked war.

Meanwhile Rodion Miroshnik, ambassador to Moscow of the Luhansk separatists, said Russian and separatist troops were advancing westward into Lysychansk and street battles had erupted around the city stadium.

Fighting was going on in several surrounding villages, and the pro-Russian fighters had entered an oil refinery where Ukrainian troops were concentrated, he said on the Telegram messaging app.

The advances in Luhansk have given Moscow its biggest victories in weeks, playing to Russia's strength in overwhelming artillery firepower that can demolish cities in its path.

But Ukraine still hopes to turn the tide in coming weeks with a counterattack after Moscow exhausts its invading forces in costly battles that yield slow gains.

Kyiv has begun to receive more advanced Western weapons, including battlefield rockets that can hit targets far behind the front.