Russia's invasion of Ukraine has not caught Finland unprepared.

Even the Santa Claus theme park in his "hometown" in the snowy north is ready to stand down its elves and revert to its original function - an emergency bomb shelter in case of attack.

Tens of thousands of people visit the Santa Park in Rovaniemi city in Lapland each year to meet Santa and have their photograph taken with him.

Its main purpose, however, is far from festive. 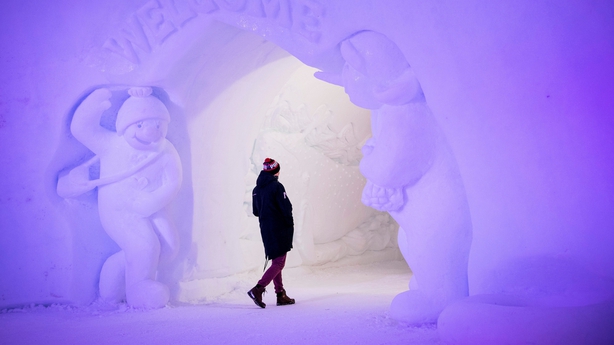 Carved into a hill, the shelter is equipped to withstand bombings or a chemical or nuclear attack and could house 3,600 people.

It has camping beds, first aid kits and even equipment to dig a tunnel back to the surface in case the construction collapses.

A separate well provides water, although people would need to bring their own food.

While most of the Santa-themed items would have to be cleared out in case the shelter needed to be used, some toys from the gift shop would be kept for children seeking safety there.

"In the event of a crisis, Rovaniemi residents will be protected here," said Rovaniemi security chief Tapio Hietakangas.

"And if families come and have to stay here for long, this is a good place if we think about the comfort of the children."

The Santa shelter is just one of about 50,000 built after the Nordic country experienced two wars with the Soviet Union during World War II.

They can be converted into emergency housing for some 80% of its 5.5 million population within hours should military action spill over the 1,300-km Finland-Russia border or even in case of a nuclear plant disaster in Russia.

Warehouses have stores of food, fuel and drugs.

Military preparedness is also a focus. While Finland's number of salaried military personnel stood at only around 19,000 last year, its defence relies on a compulsory conscription army which would have wartime strength of 285,000 men.

Following the Russian invasion of Ukraine in February, Finland decided to end its long-held policy of neutrality and apply to join the NATO alliance.

Moscow called this a hostile move that posed a threat to its own security, although it has not said what action, if any, it could take in response.

But its suspicion of its eastern neighbour dates back to the "Isoviha" or "Great Wrath", a period of Russian occupation that ravaged the land between 1713 and 1721 when it was still part of Sweden.

More than 800 km south from Rovaniemi in the capital Helsinki, city emergency planning officer Tomi Rask has spent 25 years preparing and training others to prepare for a military attack.

Helsinki has an underground command centre built in 1980s to protect city management from a nuclear blast as well as some 5,500 civil defence shelters for ordinary citizens.

Most shelters in Finland are private as it has been mandated by law to build one under every apartment block since the 1940s.

"I believe that we are ready, or at least I am ready," Mr Rask said.

"But again, it's just for me. For my family, the answer might be quite different."