Advancing Russian forces came closer to surrounding Ukrainian troops in the east, briefly seizing positions on the last highway out of a crucial pair of Ukrainian-held cities before being beaten back, a Ukrainian official has said.

Three months into its invasion of Ukraine, Russia has abandoned its assault on the capital Kyiv and is trying to consolidate control of the industrial eastern Donbas region, where it has backed a separatist revolt since 2014.

It has poured thousands of troops into its assault, attacking from three sides in an attempt to encircle Ukrainian forces in Sievierodonetsk and Lysychansk.

The fall of the two cities, which straddle the Siverskiy Donets river, would bring nearly the whole of Luhansk province under Russian control, a key Kremlin war aim.

"Russia has the advantage, but we are doing everything we can" in the battle in the area, said General Oleksiy Gromov, deputy chief of the main operations department of Ukraine's general staff.

Serhiy Gaidai, governor of Luhansk province, said around 50 Russian soldiers had reached the highway and "managed to gain a foothold for some time. They even set up some kind of checkpoint there".

"The checkpoint was broken, they were thrown back. That is to say, the Russian army does not control the route now, but they are shelling it," he said in an interview posted on social media.

He hinted at further Ukrainian withdrawals, saying it was possible troops would leave "one settlement, maybe two. We need to win the war, not the battle".

"It is clear that our boys are slowly retreating to more fortified positions - we need to hold back this horde," he said.

Western military analysts see the battle for the two cities as a potential turning point in the war, now that Russia has defined its principal objective as capturing the east.

The town is now under firm control of pro-Russian fighters, who have occupied the local government building and hung a red flag bearing the Soviet hammer and sickle at the door.

Drone footage filmed by Reuters of the nearby abandoned battlefield showed scores of craters pockmarking a green field surrounded by wrecked buildings. Pro-Russian fighters were milling about in trenches.

Russia's recent gains in the Donbas follow the surrender of Ukraine's garrison in Mariupol last week, and suggest a shift in momentum on the battlefield after weeks in which Ukrainian forces had advanced near Kharkiv in the northeast.

Russian troops have broken through Ukrainian lines at Popasna, south of Sievierodonetsk, and are threatening to encircle Ukrainian forces, he wrote.

"The extent to which this breakthrough at Popasna threatens Ukraine's overall position depends on whether or not Russian forces gain momentum."

A few weeks ago, it was Ukrainian forces that were advancing, pushing Russian troops back from the outskirts of Kharkiv towards the Russian border. But Moscow appears to have halted its retreat there, retaining a strip of territory along the frontier and preventing Ukrainian troops from cutting Russian supply lines that run east of the city to the Donbas.

Nine people were killed in fresh Russian shelling on Ukraine's second city Kharkiv Thursday, a regional official said, where many have returned after Russia's attempts to capture the eastern city were repelled.

A five-month-old child as well as her father were among the dead, while her mother was gravely wounded, he added.

"Nineteen civilians were injured," he said.

He described the toll, which followed strikes in three areas of the city near the border with Russia, as "the terrible consequences of Russian aggression".

An AFP reporter in the city said the northern residential district of Pavlove Pole was hit and saw plumes of smoke rising from the area.

The journalist saw several people wounded near a shuttered shopping centre, while an elderly man with injuries to his arm and leg was carried away by medics.

The Donbas advance has been backed by massive artillery bombardment. Ukraine's armed forces said more than 40 towns in the region had been shelled in the past 24 hours, destroying or damaging 47 civilian sites, including 38 homes and a school. 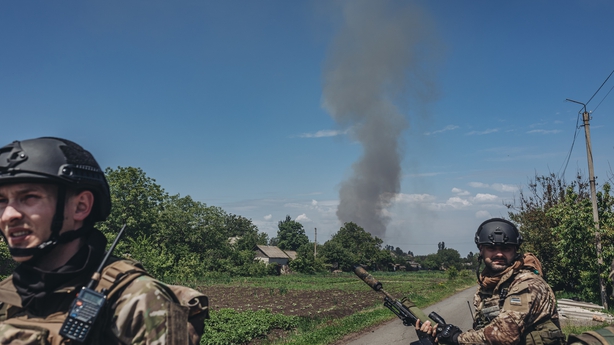 In a speech by videolink to leaders of other ex-Soviet states, President Vladimir Putin played down the impact of sanctions imposed by Western countries and the suspension of operations in Russia by many international companies.

Russian bailiffs have seized more than 7.7 billion roubles(€123.3 million) from Google that the US tech giant had been ordered to pay in a fine, Interfax news agency reported.

Global attention this week has focused on Russia's blockade of Ukraine's Black Sea ports, which has halted exports from one of the world's biggest suppliers of grain and cooking oil.

Western countries say Moscow is blackmailing poor countries by causing a global food crisis. Russia says it will open the ports if sanctions are lifted.

It wants Kyiv to recognise Russian sovereignty over the Crimea peninsula Moscow seized in 2014, and the independence of separatist-claimed territory.

In a speech to dignitaries in Davos, Switzerland, German Chancellor Olaf Scholz said Mr Putin must not be permitted to impose peace terms.

"There will be no dictated peace," Mr Scholz said. "Ukraine will not accept this, and neither will we."

The United States pushed Russia closer to the brink of a historic debt default by not extending its licence to pay bondholders. That waiver has allowed Moscow to keep up government debt payments till now.

The European Commission proposed to make breaking EU sanctions against Russia a crime.

The EU also said it hoped to agree sanctions on Russian oil before the next meeting of EU leaders.

But Russia, for now at least, is not short of money. Oil and gas revenues stood at $28 billion in April alone, thanks to high energy prices.

Belarus leader Alexander Lukashenko has ordered the creation of a new military command for the south of country, bordering Ukraine.

"A new front has opened and we can't fail to pay attention to it," Mr Lukashenko, wearing military uniform, told a televised meeting of defence officials.

He said the new command had been proposed last year but needed to be set up immediately.

"Even before creating it, we are obliged today - quickly, on the run, to work out the defence of our southern borders," Mr Lukashenko said.

Belarus is a close ally of Russia and allowed it to launch the northern prong of its 24 February invasion of Ukraine from Belarusian territory.

Any build-up of Belarusian forces near the border will further stretch Ukraine's military as it defends against Russian attacks focused on the Donbas region.

Belarus said earlier this month it planned to deploy special operations troops in three areas near the border with Ukraine, as Mr Lukashenko talked up the role of Russian-made missiles in boosting the country's defences.

Ukraine's richest man says he plans to sue Russia over what he said was $17 billion to $20 billion in losses caused by its bombardment of steel plants he owns in the devastated city of Mariupol.

The Azovstal steelworks suffered heavy damage from Russian bombing and shelling after the sprawling plant became the last bastion of defence in the southern port city. The Illich Steel and Iron Works, also owned by Rinat Akhmetov, was also badly damaged during Russian shelling of Mariupol.

"We will definitely sue Russia and demand proper compensation for all losses and lost business," Mr Akhmetov, who owns the biggest Ukrainian steelmaker Metinvest, told Ukrainian news portal mrpl.city in an interview.

Asked how much money Metinvest had lost because of the damage to Azovstal and Illich, he said: "The replacement cost... due to Russian aggression is from $17 to $20 billion. The final amount will be determined in a lawsuit against Russia."

Billionaire Mr Akhmetov had already seen his business empire shattered before the war by eight years of fighting in Ukraine's east after pro-Russian separatists took over swaths of territory there.

Since Russia's invasion on 24 February, Metinvest has announced it cannot deliver its supply contracts.

While Mr Akhmetov's financial and industrial SCM Group is servicing its debt obligations, his private power producer DTEK has restructured its debt portfolio, he said.