Russian President Vladimir Putin has said that Russia's military operations in Ukraine are going according to plan, while praising the country's soldiers as heroes.

Putin's televised comments seemed designed to rebuke statements by Western governments and intelligence agencies that Russia's campaign has stumbled in the face of logistical problems, tactical mistakes and fiercer-than-expected resistance from Ukraine.

"I want to say that the special military operation is proceeding strictly in line with the timetable. According to plan. All the tasks that have been set are being successfully resolved," he said, a week after Russia sent tanks and troops into Ukraine from the north, east and south.

He made a series of allegations against Ukrainian forces for which he did not provide evidence, while also reaffirming his stated rationale for the war, which Ukraine and the West have rejected as baseless propaganda.

"Now on Ukrainian territory, our soldiers and officers are fighting for Russia, for a peaceful life for the citizens of Donbass, for the denazification and demilitarization of Ukraine, so that we can't be threatened by an anti-Russia right on our borders that the West has been creating for years," he said.

Meanwhile, French President Emmanuel Macron believes "the worst is to come" in Ukraine after a 90-minute phone call with Putin who appears intent on seizing "the whole" of the country, an aide to the French leader has said.

"The expectation of the president is that the worst is to come, given what President Putin told him," a senior aide to the French leader told reporters on condition of anonymity.

"There was nothing in what President Putin told us that should reassure us. He showed great determination to continue the operation," the aide continued.

He added that Putin "wanted to seize control of the whole of Ukraine. He will, in his own words, carry out his operation to 'de-Nazify' Ukraine to the end."

"You can understand the extent to which these words are shocking and unacceptable and the president told him that it was lies," the aide said.

"President Putin replied that he was in favour but without making any commitments," the aide said, adding that Putin had denied that the Russian military was targeting civilian infrastructure in Ukraine.

Mr Macron will again push for extra sanctions on Russia to increase the cost of the invasion, the aide said while denying any open tensions between the two men.

"President Putin has a way of talking that is very neutral and very clinical. He sometimes shows signs of impatience, but fundamentally there were no open signs of tensions during the exchanges," the aide said.

Meanwhile, Ukrainian officials have said they will call for humanitarian corridors for its besieged citizens at ceasefire talks with a Russian delegation, which are now under way at the Belarus-Poland border.

Start talking to Russian representatives. The key issues on the agenda:
1. Immediate ceasefire
2. Armistice
3. Humanitarian corridors for the evacuation of civilians from destroyed or constantly shelled villages/cities. pic.twitter.com/Pv0ISNjsod

The talks come as the war enters its second week, with a number of Ukrainian cities surrounded and under bombardment.

Hundreds of Russian soldiers and Ukrainian civilians have been killed since Russian President Vladimir Putin sent his troops over the border on 24 February. Russia itself has been plunged into isolation never before experienced by an economy of such size.

The United Nations has said more than one million refugees had fled in just seven days, one of the fastest exoduses in memory.

Ukrainian negotiator and presidential adviser Mikhailo Podolyak tweeted a picture of the delegations at a conference table in an undisclosed location. The Ukrainians wore battle fatigues and winter jackets; the Russians wore suits and ties.

Mr Podolyak said Ukraine would demand an immediate ceasefire, armistice and "humanitarian corridors for the evacuation of civilians from destroyed or constantly shelled villages/cities."

Neither side has suggested it was expecting breakthroughs after a first round of talks held in Belarus on Monday led to no progress.

Despite an initial battle plan that Western countries said was aimed at swiftly toppling the Kyiv government it describes as dangerous nationalists who threaten its security, Russia has captured only one Ukrainian city so far - the southern Dnipro River port of Kherson, which its tanks entered on Wednesday.

With its main assault force halted for days on a highway north of Kyiv, Russia has shifted tactics, escalating its bombardment of major cities. Swathes of central Kharkiv, a city of 1.5 million people, have been blasted into rubble.

Mariupol, the main port of eastern Ukraine, has been surrounded under heavy bombardment, with no water or power. Officials say they cannot evacuate the wounded. The city council compared the situation to the World War II siege of Leningrad.

Read more on the invasion of Ukraine 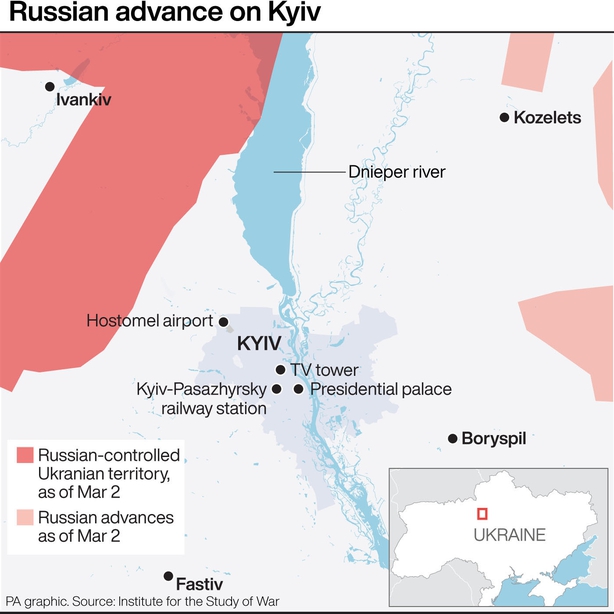 Ukraine's President Volodymyr Zelensky has stayed in Kyiv, releasing regular video updates to the nation. In his latest message, he said Ukrainian lines were holding. "We have nothing to lose but our own freedom," he said.

Britain's defence ministry said the main body of the huge Russian column advancing on Kyiv was still 30km from the city centre, held up by Ukrainian resistance, mechanical breakdown and congestion.

"The column has made little discernible progress in over three days," it said in an intelligence update.

At least 33 people were killed in a Russian air strike that hit two schools and private houses in the eastern Chernihiv region today.

Footage from a car dashboard camera, verified by Reuters, showed buildings in a residential area in Chernihiv hit by apparent missiles.

The street was engulfed in a fireball and a huge cloud of black smoke rose into the sky.

Two cargo ships came under apparent attack at Ukrainian ports. Four crew members were missing after an Estonian-owned ship exploded and sank off Odessa, and at least one crew member was killed in a blast on a Bangladeshi ship at Olvia. Ukraine is one of the world's biggest grain and food oil exporters from its Black Sea ports.

In Beijing, organisers sent Russian and Belarusian athletes home from the Paralympic Games, saying Moscow and Minsk were to blame for violating the Olympic Truce. Russia called the ban "monstrous".

In Russia itself, where nearly all major opposition figures have been jailed or exiled in a crackdown over the past year, the authorities have banned reporting that describes the "special military operation" as an "invasion" or "war".

Ekho Moskvy radio, the best-known independent broadcaster of the post-Soviet era and one of Russia's few remaining liberal voices, shut itself down today after authorities ordered it off the air.

Riot police snatched peaceful protesters off the streets in St Petersburg late last night, including a 77-year-old woman filmed being muscled away by men in black helmets.

Activists distributed footage of a small girl weeping behind bars, having been arrested for holding up a sign that said "No war".

The great fear is that, as the likelihood of rapid victory recedes, Russia will fall back on tactics it used in Syria and Chechnya, where it pounded the cities of Aleppo and Grozny to ruins.

Russia has already acknowledged nearly 500 of its soldiers killed. Ukraine says it has killed nearly 9,000, though this cannot be confirmed. Ukrainian authorities have offered to free Russian prisoners if their mothers come fetch them.

Russia denies targeting civilians and says its aim is to "disarm" Ukraine and arrest leaders it falsely calls neo-Nazis. 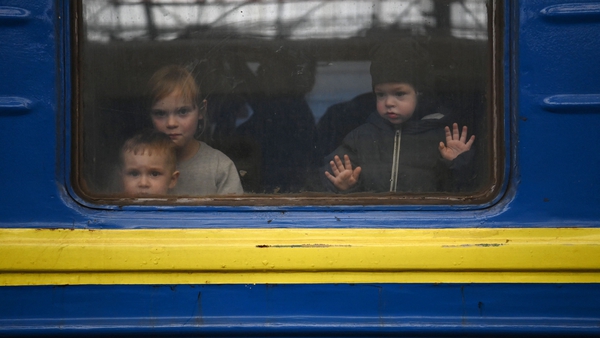 More than 1 million refugees flee from Ukraine since invasion