Police in Britain said they have not yet found human remains as their search for Moors Murders victim Keith Bennett continues following the reported discovery of a skull.

The 12-year-old was one of five victims of Ian Brady and Myra Hindley, with three of them later found buried on Saddleworth Moor.

But the schoolboy's body was never found following his disappearance in 1964, and 48 years later his mother, Winnie Johnson, died aged 78 without fulfilling her wish to give him a proper burial.

Yesterday, a report in the Daily Mail revealed that author Russell Edwards believed he had located Keith's makeshift grave following "extensive soil analysis" which indicated the presence of human remains.

It is said Mr Edwards commenced his own dig - close to where the other Moors Murders victims were found - and uncovered a skull with teeth present which independent experts are reported to have concluded is human.

But in a statement this afternoon, Greater Manchester Police (GMP) said photographs of the site which showed what had been interpreted as a human jaw bone had not led to physical evidence being examined.

Force review officer Cheryl Hughes said: "Following information received which indicated that potential human remains had been found on the Moors, specialist officers have today resumed excavation of a site identified to us.

"This information included photographs of the site and show what experts working with the informant have interpreted as a human jaw bone.

"No physical evidence of a jaw bone or skull has been examined.

"However, based on the photographs and information provided, and in line with GMP's usual practice to follow up any suggestion of human burial, we began our search of the site of interest.

"We have not found any identifiable human remains but our work to excavate the site is continuing.

"Conditions are difficult and it may take us some time to fully complete the excavation, but we are committed to ensuring this is undertaken in the most thorough way possible." 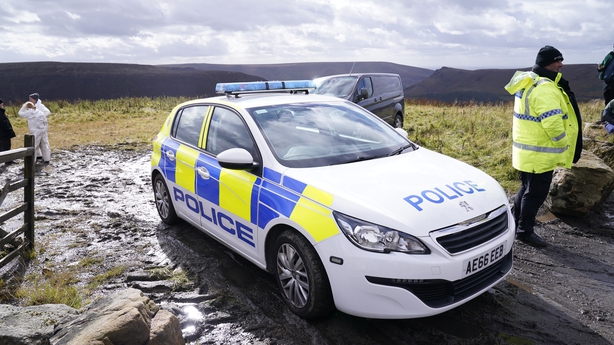 Keith was last seen by his mother in the early evening of 16 June 1964 after he left home in Eston Street, Longsight, Manchester, on his way to his grandmother's house nearby.

The killers were caught after the Evans murder and Lesley and John's bodies were recovered from the moors.

Both Brady and Hindley were taken back to Saddleworth Moor to help police find the remains of the outstanding victims, but only Pauline's body was recovered.

Brady claimed he could not remember where he had buried Keith.

In 2009, police said a covert search operation on the moor, which used a wealth of scientific experts, had also failed to discover any trace of the boy.