British army drivers have begun delivering supplies to beleaguered petrol stations in the UK hit by a fuel crisis.

Around 200 military personnel - half of them drivers - are being deployed in Operation Escalin, despite ministers insisting the situation at the pumps is easing.

The troops, who have been on standby since the start of last week, will initially be concentrated in London and the southeast, where the worst shortages remain.

They include members of 3rd Logistic Support Regiment who have been training with the petroleum industry logistics company Hoyers in Thurrock in Essex. 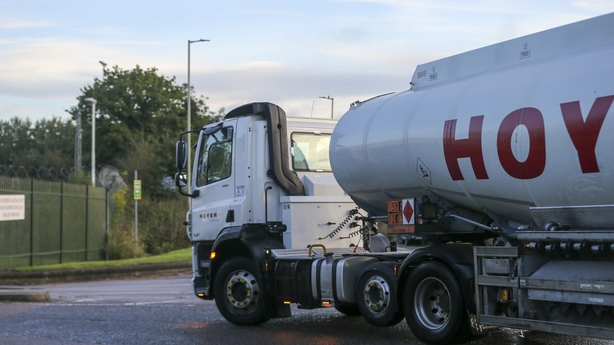 MPs have faced criticism for not sending them out earlier after a wave of panic-buying, prompted by reports that supplies to filling stations were being hit, led to chaos on the forecourts.

The government has however been deploying its reserve tanker fleet - driven by civilian drivers - since last week in an effort to bolster supplies.

A government spokesman said: "We are working closely with industry to help increase fuel stocks and there are signs of improvement in average forecourt stocks across the UK with demand continuing to stabilise.

"Stocks in London and the south of England have been recovering at slightly slower rates than other parts of the UK, so we have begun deploying military personnel to boost supply in these areas.

"More than half of those who have completed training to make fuel deliveries are being deployed to terminals serving London and the southeast of England, demonstrating that the sector is allocating drivers to areas most affected in this first phase from Monday."

Operation Escalin was originally drawn up in preparation for possible fuel shortages following Britain's final withdrawal from the EU single market at the start of the year.

The Petrol Retailers Association (PRA) - representing independent retailers - has welcomed the deployment of the military, although it has suggested it will only have limited impact.

PRA chairman Brian Madderson said while the crisis was "virtually over" in Scotland, the north and the midlands, more than one-in-five filling stations in London and the southeast were out of fuel. 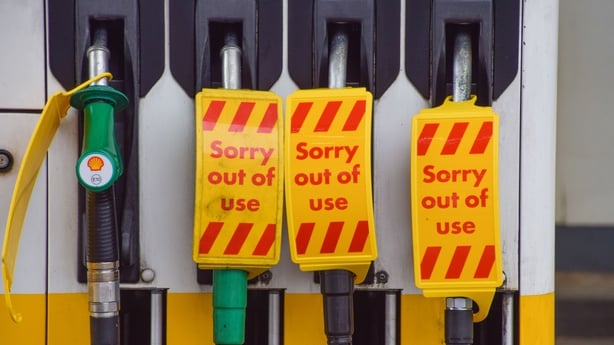 Conservative MP for North-West Leicestershire, Andrew Bridgen, has said the UK needs to train its own lorry drivers, pay them properly and improve the "lamentable" facilities for drivers across the country.

Speaking on RTÉ's Today with Claire Byrne, Mr Bridgen said the average age of a lorry driver is 55, and he said it was a failure of government not to include lorry drivers in previous apprentice schemes.

Fine Gael TD for Dublin-Rathdown, Neale Richmond, said the deliberate policy decisions made by the UK government have made the situation of truck driver shortages much worse than within the EU.

"To blame it on media is the worst form of cop out", he told the programme, adding that mass tailbacks and supply issues are only occurring in the UK.

British Prime Minister Boris Johnson, attending the opening day of the Tory Party conference in Manchester yesterday, expressed confidence the crisis was "abating" and said the military were being deployed as a "precaution".

However, he repeatedly refused to rule out shortages in the wider economy in the run up to Christmas.

As well as an estimated shortfall of 100,000 HGV drivers, businesses from meat producers to retail, have warned of empty shelves if the shortages are not addressed.

Mr Johnson acknowledged the country was going through a "period of adjustment" following Brexit, which has cut off the supply of labour from the EU.

He insisted that he was not prepared to resolve the situation by pulling "the big lever marked uncontrolled immigration" to let in more foreign workers.

He said firms should ensure their employees were "decently paid" if they wanted to get more staff.

Pharmacists in Britain said they were seeing delays to deliveries of medicines in some areas and called on the government to ensure a robust contingency plan was in place to prevent deeper medicine supply problems.

"Pharmacists and their teams have been working very hard to ensure patients have access to their medicines during the current crisis," Leyla Hannbeck, CEO of the Association of Independent Multiple Pharmacies (AIMp), said.

"While the situation with fuel crisis has started to improve, we are aware that some geographical areas continue to be affected by delays to deliveries of medicines," Ms Hannbeck said.

She said the crisis was having a considerable impact on the workload and stress of pharmacists.

"We are watching the situation with delivery drivers and fuel crisis very closely and are liaising with the government and asking the government to ensure robust contingency plans and strategy are in place to ensure medicines supply is not affected and that we can continue caring for our patients," Ms Hannbeck said.

AIMp represents community pharmacy businesses with multiple pharmacies. Its members represent a significant number of pharmacies across the UK.