The environmental group Insulate Britain, which has repeatedly blocked the country's busiest motorway running around London this month, said more than 40 people had obstructed a roundabout leading to the port.

"We are working with the police and apologise for the disruption. The port remains open," the Port said in a statement.

Police said they had arrested 12 people so far, adding that the protest was causing disruption.

"Kent Police is aware of the traffic disruption in the area and is working with partner agencies to minimise delays," a police statement said. 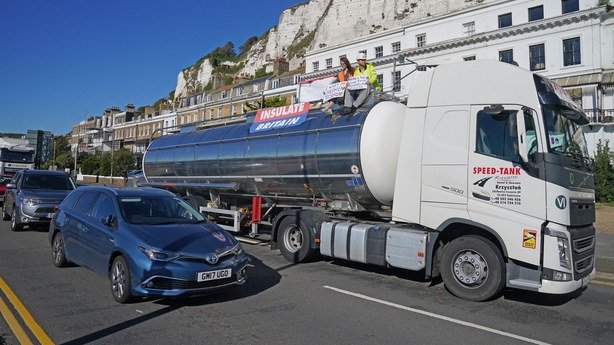 The National Highways agency said the A20 road towards the port, which handles about 6,000 trucks a day travelling across the English Channel, had been blocked.

"We are sorry for the disruption that we are causing," said Insulate Britain, which wants the government to commit to providing insulation for 29 million homes.

"It seems to be the only way to keep the issue of insulation on the agenda."

On Tuesday, the government secured a court order meaning its activists could face imprisonment if they blocked the London M25 orbital motorway again, after five days of protests in which they obstructed slip roads and the carriageway itself by glueing themselves to the road and pouring paint on it.