Mr Cummings, architect of the successful campaign for Britain to leave the European Union, left Mr Johnson's staff suddenly late last year having previously been his most influential adviser over Brexit and a 2019 election campaign.

Three British newspapers reported today, citing unidentified sources in Mr Johnson's office, that Mr Cummings was behind the leak of text messages in which Mr Johnson promised to fix a tax issue for Mr Dyson, who was working on supplying ventilators to the government to cope with Covid-19.

Mr Johnson's office launched an inquiry to find the source of the leak, but subsequently declined to comment on the reports that Mr Cummings was responsible.

Writing on his blog, Mr Cummings denied he had given the text messages to journalists and offered to cooperate with the leak inquiry.

"I am happy to meet with the Cabinet Secretary and for him to search my phone for Dyson messages," he wrote.

Mr Cummings' departure last year was seen as a chance to reset Mr Johnson's leadership as public confidence in his handling of the pandemic and Brexit sunk.

On his blog, Mr Cummings also said he was not responsible for leaks over the cost of refurbishing Mr Johnson's residence, and a separate leak last year when details of the government's plan to enter a lockdown were reported before a formal announcement.

The leak of the texts to Mr Dyson was not the first time the prime minister's messages have been made public.

A Number 10 source told The Sun that Mr Johnson "fears Dom was responsible for the text message leaks about James Dyson and Mohammed bin Salman".

The Telegraph said it is understood Mr Cummings would have had legitimate access to the messages while he worked at Number 10.

"If you join the dots it looks like it's coming from Dom," a source told the newspaper.

The former Vote Leave mastermind worked closely with Mr Johnson on the Brexit campaign and was a major figure in Number 10 after Mr Johnson took office.

The prime minister stood by him after Mr Cummings found himself in the eye of a media storm after driving his family to Co Durham during the coronavirus lockdown.

But Mr Cummings was subsequently ousted from No 10 amid the fallout from an internal power struggle with the prime minister's fiancée, Carrie Symonds.

Number 10 had initially said there would not be a probe into how the exchange with Mr Dyson was made public, but a change of course was announced yesterday as it said an internal inquiry will be led by the Cabinet Office.

The prime minister's official spokesman told a Westminster briefing: "I can confirm that, yes, we have instructed the Cabinet Office to look into this.

"The position has changed from yesterday - it was correct at the time yesterday but, as usual, we keep things under review and we have now decided to undertake this internal inquiry."

The spokesman confirmed the inquiry will examine the source of leaks of Mr Johnson's private communication "as related to this issue of Dyson". 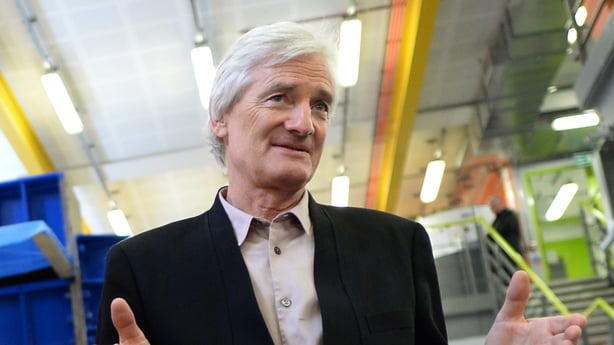 The BBC reported that the messages between Mr Johnson and Mr Dyson were exchanged in March last year after the businessman was unable to get the assurances he was seeking from the Treasury.

Mr Dyson, who has changed his main address in business filings to the UK from Singapore, wrote to the Treasury requesting that his staff would not have to pay additional tax if they came to the UK to work on the ventilator project.

But when he failed to receive a reply, Mr Dyson reportedly took up the matter directly with the prime minister.

He said in a text that the firm was ready but that "sadly" it seemed no-one wanted them to proceed, to which Mr Johnson replied: "I will fix it tomo! We need you. It looks fantastic."

The prime minister then texted him again saying: "(Chancellor) Rishi (Sunak) says it is fixed!! We need you here."

Two weeks later, Mr Sunak told the Commons Treasury Committee that the tax status of people who came to the UK to provide specific help during the pandemic would not be affected.

Downing Street has said it will publish correspondence between Mr Johnson and Mr Dyson "shortly", after the prime minister told the Commons he was "happy to share all the details" of the exchanges.

Mr Woodward is understood to have been in No 10 for a meeting with officials rather than Mr Johnson.

But The Independent reported Mr Woodward was introduced to the prime minister following the meeting with Number 10 chief of staff Dan Rosenfield on Wednesday last week.

Downing Street insiders insisted the talks did not cover the breakaway European competition and "the prime minister was not in that meeting".

News of the competition involving Manchester United and five other English teams, along with sides from Spain and Italy, broke on Sunday night.

Shadow culture secretary Jo Stevens said: "The prime minister and his ministers made very public and vocal condemnation of the European Super League.

"The public would therefore expect the same message to have been delivered in any private meetings.

"Downing Street should release the minutes in order to clear up any confusion and avoid accusations of hypocrisy."