The funeral of the Duke of Edinburgh, husband of Britain's Queen Elizabeth, has taken place at Windsor Castle.

Prince Philip died last week at the age of 99.

The Duke of Edinburgh's coffin was first carried from Windsor Castle to a Land Rover Defender hearse.

His coffin was placed on the modified Land Rover that the duke himself helped to design, and carried in a procession to the chapel. 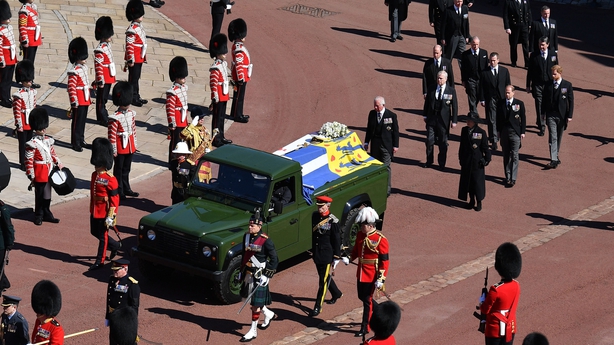 The coffin was followed slowly by his grieving children - Charles, Anne, Andrew and Edward - accompanying them were his grandsons, princes William and Harry, and the Queen, who was in a Bentley car.

Thirty mourners attended the service that was held in Saint George's Chapel at Windsor Castle in Berkshire.

A national minute's silence was observed at 3pm just before the funeral service began. Afterwards, the Duke of Edinburgh was interred in the Royal Vault of St George's Chapel.

Buckingham Palace said the funeral plans had been modified to take into account public health guidelines.

Mourners were reduced from around 800 to just 30, and all guests wearing face masks and sitting apart. 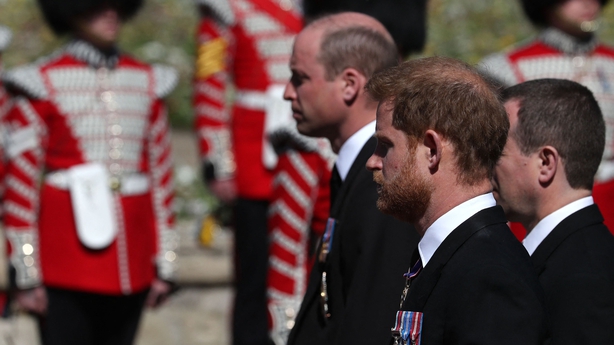 The funeral took place entirely within the grounds of the castle and the public were asked not to gather there or at other royal residences.

Prince Philip and Queen Elizabeth were married for 73 years.

In Northern Ireland, Stormont's First Minister Arlene Foster marked the minute's silence for the Duke of Edinburgh at Enniskillen Castle.

The DUP leader was joined by party councillors and piper Aaron Elliott outside the Co Fermanagh castle to observe the silence as the funeral began.

In remembrance. HRH The Prince Philip, Duke of Edinburgh.

Our prayers are with HM the Queen and the Royal Family.

While the minute's silence was held there was a two-gun salute in tribute to the duke at Hillsborough Castle in Co Down.

Flowers were laid beneath a tree planted by the duke during his first visit to the castle, the Queen's official residence in Northern Ireland, in 1949.

In the Republic, the tricolour was flown at half mast at Áras an Uachtaráin to mark the death of Prince Philip.

The tricolour flying at half mast at Áras an Uachtaráin today, to mark the death of Britain's Prince Philip. pic.twitter.com/wVWlQnSMes