President Michael D Higgins has conveyed his condolences to Britain's Queen Elizabeth on the death of her husband Prince Philip.

"I have learnt with great sadness of the death of HRH Prince Philip, Duke of Edinburgh.

"On behalf of the people of Ireland, I wish to convey my condolences to Her Majesty Queen Elizabeth, her children, her extended family and the people of the United Kingdom," a statement read.

"For over 60 years, and as husband to Britain’s longest serving monarch, Prince Philip served the British people with an unfailing commitment and devotion to duty," the President said.

Mr Higgins said that in the course of his long service Prince Philip frequently brought an "air of informality to otherwise formal occasions". 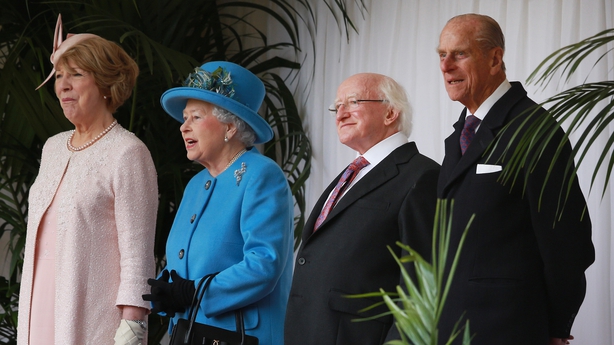 President Higgins referenced the first Irish State visit to the UK which he made with his wife Sabina in 2014.

"I recall with a special appreciation how welcome he made Sabina and I feel in 2014, when I was making the first State Visit by an Irish Head of State to the United Kingdom in 2014."

He said it was his hope that this visit as well as the State visit of Queen Elizabeth to Ireland in 2011, would continue to be "symbols of what we share as neighbours in friendship, peace and a sustainable future". 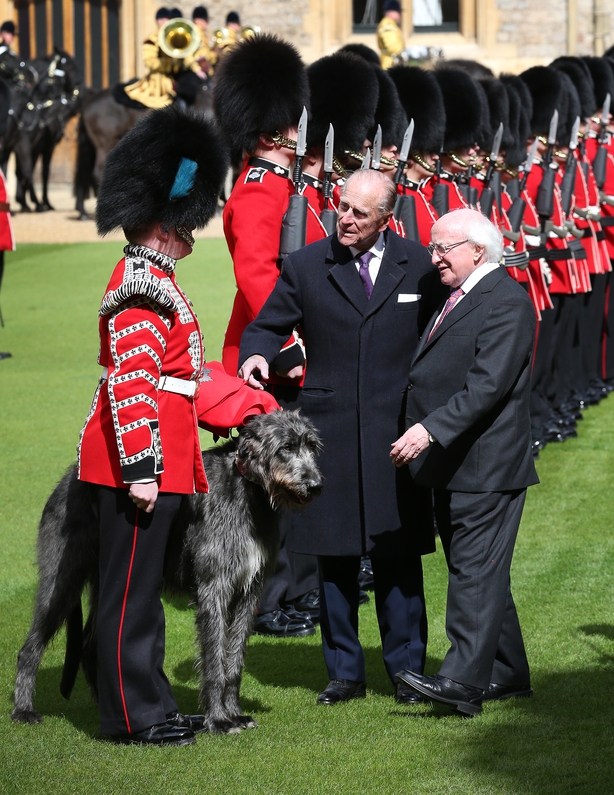 In a statement Taoiseach Micheál Martin said his thoughts and prayers were with Queen Elizabeth.

"Ireland remembers the great success of the State Visit to Ireland in 2011 by Queen Elizabeth and Prince Philip, a historic and important occasion which was a key moment in our bilateral relations.

"This was followed in 2014 by the State Visit to the United Kingdom by the President and Mrs Higgins, when they were hosted so generously in Windsor Castle and across Britain," the statement read.

"The commitment of the Royal Family to Irish-British relations is an important part of the work we do together - and today we pay tribute to Prince Philip's own important contribution."

Saddened to hear of the death of HRH Prince Philip, Duke of Edinburgh.
Our thoughts and prayers are with Queen Elizabeth and the people of the United Kingdom at this time.

Minister for Foreign Affairs Simon Coveney said he wished to "express sincere condolences to all British people on the sad passing of His Royal Highness Prince Philip, Duke of Edinburgh".

"Our thoughts and solidarity are with you on a very sad day for the United Kingdom."

Arlene Foster tweeted, "as First Minister of Northern Ireland and Democratic Unionist Party Leader, I offer my deepest sympathies to Her Majesty The Queen and to all members of the Royal Family at this sad time".

As First Minister of Northern Ireland and Democratic Unionist Party Leader, I offer my deepest sympathies to Her Majesty The Queen and to all members of the Royal Family at this sad time. pic.twitter.com/5k5bqRtPzq

Sinn Féin leader Mary Lou McDonald tweeted her sympathies to those of a British identity on the island of Ireland, for whom, she said, "his death will be felt as a great loss".

Sinn Féin’s Michelle O'Neill said "as Deputy First Minister I wish to extend my sincere condolences to Queen Elizabeth and her family on the death of her husband Prince Phillip".

She added: "He was not in the least bit grandiose, far from it. There was no edge to him at all and he was very easy company."

Dr McAleese said she discovered at this meeting that he and his wife Queen Elizabeth "were very well read on Irish history and up to date on contemporary politics on the island of Ireland."

"They were anxious to make some kind of contribution to reconciliation," she recalled.

Dr McAleese explained that at the time of Queen Elizabeth's visit to Ireland in 2011, Sinn Féin was opposed to the visit.

"But the Queen and Prince Philip were more than open to meeting anybody that we recommended to them.

"A year later, Martin McGuinness felt that he was able to meet them in the Lyric Theatre. What is very telling is that Prince Philip shook his hand - and when you think about what he suffered with the loss of his uncle, Lord Mountbatten."

Church leaders have also offered their condolences to Queen Elizabeth following the death of her husband.

In a statement, the Church of Ireland Bishop of Armagh and Primate of All Ireland said his prayers will be with the Royal Family in the days to come.

Revd John McDowell noted the Duke of Edinburgh's exemplary sense of duty to "the nation and Commonwealth over seven decades" and "his love, honour and obedience to Her Majesty".

The Moderator of the Presbyterian Church in Ireland has written to the Queen.

Dr David Bruce said he was sure that people of all generations, were encouraged, helped or inspired by Prince Philip's service to so many charities.

Members of the Methodist Church in Ireland have also offered sympathy.

In a statement, the President of the Methodist Church in Ireland and the Lay Leader of the Conference said the life of the Duke of Edinburgh has been one of service.

Rev Dr Thomas McKnight and Mrs Hazel Loney said Prince Philip would be remembered for many things, such as the award which bears his name and continues to enrich the lives of generations of young people.

"Most of all the Duke will be remembered as a loving husband and support to Her Majesty - a love which death cannot break," they said.