The BBC has said that it will go ahead with hundreds of newsroom staff cuts delayed during the coronavirus crisis, as UK media outlets reel from the pandemic's economic fallout.

The British broadcaster, which announced in January it planned to axe 450 newsroom jobs to meet changing audience needs and savings targets, said it now intended to implement 520 cuts.

The redundancies, which were paused as the Covid-19 crisis hit Britain severely from March, will now be implemented "in stages", it said.

"If we don't make changes, we won't be sustainable," Director of BBC News and Current Affairs Fran Unsworth, who heads the department's workforce of around 6,000 people, said in a statement.

"This crisis has led us to re-evaluate exactly how we operate as an organisation," she added, noting it was focused on delivering "fewer stories, more targeted and with more impact".

In separate streamlining moves previously unveiled, the BBC will also shed hundreds of jobs in its sprawling regional operations.

It will axe 450 positions in England, as well as 150 in Scotland, Wales and Northern Ireland, as the broadcaster tries to cut costs and shake up its local radio stations and TV news.

The cuts came on the same day the Guardian newspaper said it plans to axe 180 jobs. 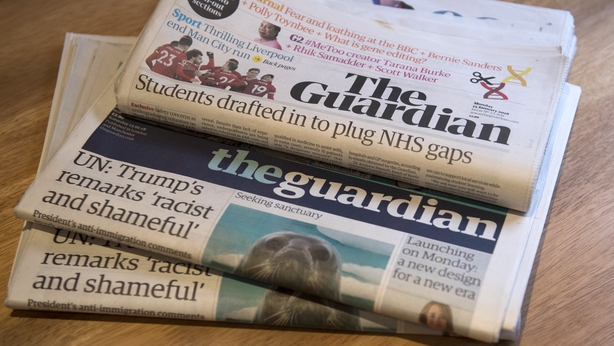 In a staff memo it said the cuts would affect around 70 editorial roles, with the remainder in areas such as advertising, marketing and events.

Editor-in-chief Katharine Viner and Guardian Media Group chief executive Annette Thomas added revenues would be down by more than £25 million (€27.6m) this financial year, and the pandemic had created an "unsustainable financial outlook for the Guardian".

The move follows an announcement last week by Reach, which publishes national newspapers the Daily Mirror and Daily Express, and a string of local titles, to cut about 550 jobs.

It also blamed the fallout from the coronavirus crisis, which had accelerated "structural change in the media sector", with increases in digital revenue not making up the shortfalls from lost advertising income.

Reach's proposed reduction of 12% of its workforce was part of plans to make annual cost savings of £35m, it added.

The Guardian announced its cuts alongside financial results for the 2019-20 financial year, which cover the 12 months to the end of March - when Britain's three-month virus lockdown was just a week old.

They showed company revenues had fallen to £223.5m. Income from readers through subscriptions and donations made up for a drop in advertising income.

The paper, which switched to a new tabloid format in 2018 to help cut costs, has kept its online content free-to-read and, in contrast to many rivals, not adopted a paywall model.

Ms Viner and Ms Thomas told staff they remained committed to the strategy.

"Despite the pressures that coronavirus has placed on our business, our unique reader relationship model has proved successful, and the strategy of the past few years has been the right one," they added.