Johnny Depp's libel case against The Sun newspaper over allegations of domestic violence has begun in the UK's High Court, with the Hollywood actor's ex-wife Amber Heard in attendance.

The 57-year-old actor is suing the tabloid's publisher News Group Newspapers (NGN) over an article which called him a "wife beater" and referred to "overwhelming evidence" he attacked Ms Heard, 34, during their relationship, which he strenuously denies.

The actor's case against NGN and The Sun's executive editor Dan Wootton arises out of the publication of an article on The Sun's website on 27 April 2018, with the headline "Gone Potty: How can JK Rowling be 'genuinely happy' casting wife beater Johnny Depp in the new Fantastic Beasts film?"

The words "wife beater" were removed from the headline the following morning and were not used in the print edition, but Mr Depp says the article still caused "serious harm to his personal and professional reputation" and "significant distress and embarrassment".

The Pirates Of The Caribbean star denies ever having been violent to Ms Heard, and claims the article included quotes from alleged victims of disgraced film producer Harvey Weinstein in order to "finish his career" by linking the allegations against him to the #MeToo and Time's Up movements.

The publisher relies on 14 alleged incidents of domestic violence, including what Ms Heard describes as a "three-day hostage situation" in Australia in March 2015 when Mr Depp lost the tip of his middle finger in disputed circumstances.

Mr Depp and Ms Heard both arrived at the Royal Courts of Justice in London today wearing face coverings, with more than 30 photographers waiting outside the entrance.

Last week, Mr Depp failed in a last-minute bid to stop his ex-wife attending until she is called to give evidence. 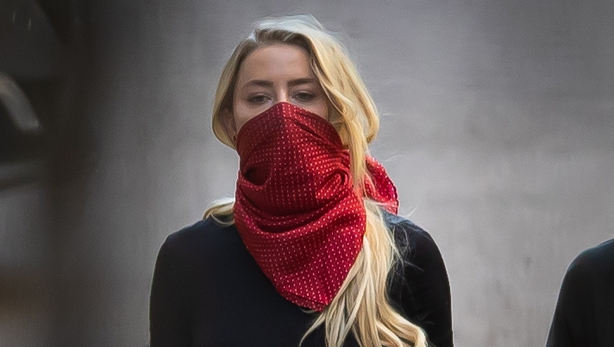 Johnny Depp told the judge how his drug use started "at a very young age", beginning when he took one of his mother's "nerve pills".

The Hollywood actor said his mother used to ask him to bring her the pills and he took one after realising at around the age of 11 they were "calming her nerves", adding it was "the only way that I found to numb the pain".

In cross-examination on the first day of his libel action, Mr Depp also said that the flip side of wealth and fame means being "forced to live a life of a fugitive", and that he has no anonymity.

Johnny Depp has been called as the first witness in the high-profile trial in London, which is being heard by Mr Justice Nicol.

Sasha Wass QC, barrister for NGN, asked Mr Depp if it was true that he "found drugs and alcohol" early in his life, which Mr Depp agreed with.

The actor explained how he began taking drugs in his youth "at a very young age, when it was not a particularly stable or secure or safe home life, and there was quite a lot of unpleasantness in the house".

He added: "My mother used to ask me to go and get her 'nerve pills' and I think I was around the age of 11 that it dawned on me that 'nerve pills' were calming her nerves, so I brought her her nerve pills and I took one and that began [my drug use]."

Mr Depp continued that it was "the only way that I found to numb the pain".

Johnny Depp was asked about his excessive drinking towards the end of his 14-year relationship with Vanessa Paradis.

He told the court: "I would definitely say that towards the end of my relationship with Ms Paradis, the mother of my children, it was a very painful time - to break up with someone that you have been with for 14 years and that you have two children with.

"So it was a very painful time and I was more than likely trying to numb myself as much as possible."

He said he wasn't sure if he was abusing drugs at that time, but was abusing alcohol "for sure".

Mr Depp said the family was "on the verge of falling apart" and that Ms Paradis was "very, very sad".

The barrister suggested that Mr Depp's fame and wealth had given him "a lot of freedom", to which he replied that "the other side of that coin you are, in a way, forced to live a life of a fugitive".

During the morning cross-examination session, which lasted around two hours, Ms Wass argued that there was a "nasty" side to Mr Depp's character, later suggesting he "regularly engaged in destructive and violent behaviour", which the actor denied.

He was also asked about a number of incidents in his past, including one in London in 1999 when he "chased off photographers with a piece of wood" outside a restaurant.

Mr Depp said his then-partner Vanessa Paradis was "very pregnant" at the time and he was concerned about her "being turned into somebody else's circus", adding: "I thought it was disrespectful."

In a written outline of the Hollywood star's case, his barrister David Sherborne said the article made "defamatory allegations of the utmost seriousness" against Mr Depp, accusing him of committing serious assaults on Ms Heard and "inflicting such serious injuries that she feared for her life".

The court is expected to hear evidence by video link from Mr Depp's former partners, actresses Vanessa Paradis and Winona Ryder, who both say he was never violent to them, as well as Ms Heard's friends, who claim they were present when Mr Depp was abusive.

The trial, due to last three weeks, was originally due to start in March but was delayed by the Covid-19 pandemic and is now going to occupy five courtrooms to ensure social distancing.

A separate libel claim brought by Mr Depp against Ms Heard in the US - over a December 2018 column in the Washington Post, which said the actress received "the full force of our culture's wrath for women who speak out" but did not mention Mr Depp by name - is due to begin next January.

The pair met on the set of 2011 comedy-drama The Rum Diary - based on a novel by Mr Depp's friend, Hunter S Thompson, whom he played in the 1998 film Fear And Loathing In Las Vegas - and began living together in 2012 before marrying in Los Angeles in February 2015.

Ms Heard obtained a restraining order against Mr Depp in LA shortly after the couple split in 2016 and donated her $7 million divorce settlement to charity.