British Prime Minister Boris Johnson has restated his insistence that there would be no checks for goods travelling between Northern Ireland and Great Britain under his Brexit deal.

He said the government documents shared by Labour were "wrong".

Labour leader Jeremy Corbyn said on Friday that his party had obtained a confidential government report which he claimed was proof that there would be customs checks between Britain and Northern Ireland after Brexit.

Mr Johnson told Sky News: "There's no question of there being checks on goods going NI/GB or GB/NI because they are part of - if you look at what the deal is, we're part of the same customs territory and it's very clear that there should be unfettered access between Northern Ireland and the rest of GB."

Mr Johnson also guaranteed that immigration to the UK would fall under his proposed system after Britain has left the EU.

"I can make sure that numbers will come down because we'll be able to control the system in that way and what I don't think is right is to have an uncontrolled and unlimited approach to that," he said.

Mr Johnson also refused to say whether he would resign if he fails to win a majority in Thursday's general election.

He admitted he was nervous and "fighting for every vote" ahead of the poll, but when asked if he would resign if it did not go his way, he replied: "The choice on Thursday is unbelievably stark, it's between going forward with a one nation Conservative government that can get Brexit done...

"Or spending the whole of next year in complete paralysis with two referendums, one on Scotland, one on the EU when Jeremy Corbyn cannot even tell us what his position is on Brexit and who is going to campaign for the deal that he proposes to do."

Mr Johnson also said that the naughtiest thing he was prepared to admit to was breaking the law by cycling on a path. 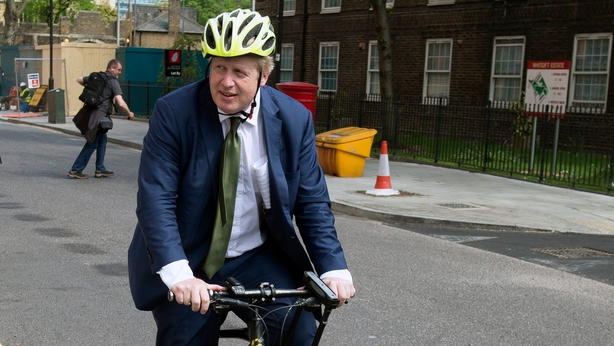 When asked what the naughtiest thing he was ready to admit to was, Mr Johnson initially asked advisers for suggestions before saying: "I think, I, you know, I may sometimes, when I was riding a bicycle every day, which I used to do, I may sometimes have not always have obeyed the law about cycling on the pavement.

"I want you know how firmly and how strongly I disapprove of people who cycle on the pavement and I think it is wrong and I feel bad about it. But I might sometimes have scooted up onto the pavement rather than dismounting before."