Julian Assange has begun his fight against extradition to the US over allegations he conspired to break into a classified Pentagon computer.

The WikiLeaks founder appeared at Westminster Magistrates' Court for his first extradition hearing since being hauled out of the Ecuadorian embassy in London where he hid for nearly seven years.

The Australian appeared via videolink from Belmarsh prison to a packed courtroom.

He formally refused to consent to being extradited, during a hearing which lasted a little over ten minutes.

The 47-year-old said: "I do not wish to surrender myself for extradition for doing journalism that has won many awards and protected many people."

Shortly after Assange was removed from the Embassy on 11 April, US prosecutors announced that he had been charged with conspiring alongside intelligence analyst Chelsea Manning to infiltrate a Pentagon computer.

The charge carries a maximum of five years' imprisonment and relates to Assange's "alleged role in one of the largest compromises of classified information" in US history.

Prosecutors claim he assisted Manning in cracking a password to help her leak classified records to the whistleblowing website.

District Judge Michael Snow remanded Assange into custody to appear via video link again at the same court on 30 May for a further case management hearing.

The extradition appearance came a day after the 47-year-old was sentenced to 50 weeks' jail for breaching bail when he failed to surrender to police in 2012. 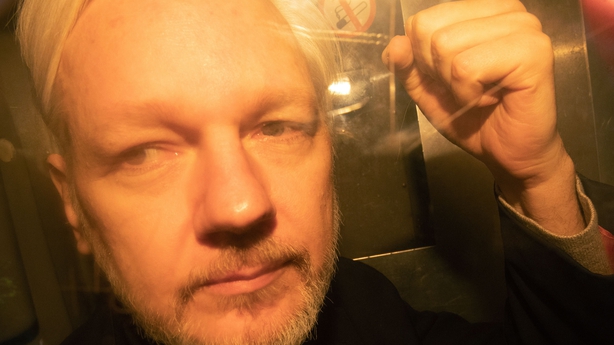 Assange was convicted of the bail breach after entering the Ecuadorian embassy and claiming political asylum while wanted over allegations of sexual offences in Sweden, which he denies.

A large group of his supporters gathered both inside and outside the court building this morning to offer solidarity. Some of those who who got inside court three for the hearing had to stand or sat on the floor.

Lauri Love, whose saw his own extradition decision over allegations he hacked US government computer networks overturned by the High Court last year, was among them.

Judges had ruled the extradition of Mr Love, who has Asperger's "would be oppressive by reason of his physical and mental condition".

The 34-year-old from Suffolk, said he came to court to "keep an eye on the process and make sure that it's done as fairly as possible".

He said: "I've been through this whole mill so I am supporting Julian in opposing extradition to the US where I think he would, like myself, not have a very strong chance of having a fair trial.

"I know how traumatic this ordeal can be, years of having to be afraid of being taken to another country and treated badly."