Police officers were among those who saw the drone, and the military has been brought in to help, the Metropolitan Police said.

The airport authorities apologised for any disruption caused to passengers after flights were suspended for around an hour this evening.

Commander Stuart Cundy of the Met said the drone sighting was reported just after 5pm, and departures were stopped as a precaution.

"Police officers were amongst those who saw the drone and a full criminal investigation has been launched. We are carrying out extensive searches around the Heathrow area to identify any people who may be responsible for the operation of the drone," he said.

"I want to be clear that the illegal operation of drones at an airfield is extremely dangerous. Under the Aviation Security Act it is an offence to endanger the safety of an aircraft, anyone found guilty of this offence could face a life sentence.

"We are deploying significant resources - both in terms of officers and equipment - to monitor the airspace around Heathrow and to quickly detect and disrupt any illegal drone activity; some of which are as a result of learning from the incidents at Gatwick.

"Following today's sighting, military assistance has been implemented to support us. However, we will not be discussing in any further detail the range of tactics available to us as this would only serve to potentially undermine their effectiveness."

A Heathrow spokesman said airport staff were continuing to monitor the situation.

He said: "We continue to work closely with the Met Police to respond to reports of drones at Heathrow.

"Based on standard operating procedures, working with Air Traffic Control and the Met Police, we have resumed departures out of Heathrow following a short suspension.

"We continue to monitor this situation and apologise to any passengers that were affected by this disruption."

British Transport minister Chris Grayling said during the incident: "We are in contact with @HeathrowAirport concerning the drone sighting.

"I have already spoken to both the Home Secretary and Defence Secretary and the military are preparing to deploy the equipment used at Gatwick at Heathrow quickly should it prove necessary." 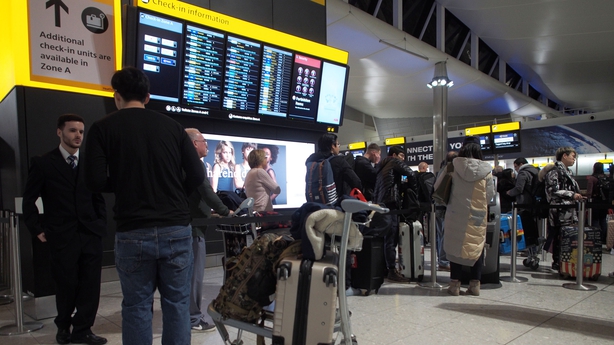 The alleged sightings came four days after both Heathrow and Gatwick airports reported they were investing millions of pounds in equipment to prevent future flight disruption.

A number of Aer Lingus flights between Heathrow and Dublin and Cork airports suffered some disruption after the temporary suspension of departures but there have been no major delays.

A spokesperson for the Dublin Airport Authority says the air route between Dublin and Heathrow is the busiest in Europe and the second busiest city pairing route in the world.

We continue to work with the Met Police on reports of drones at Heathrow. We are working with Air Traffic Control and the Met Police, and have resumed departures out of Heathrow after a short suspension. We will continue to monitor this and apologise to anyone that were affected.

Between 19 and 21 December, Gatwick Airport was repeatedly forced to close due to reported drone sightings, causing mass disruption to passengers, with about 1,000 flights affected.

The British Army was brought in to help deal with the travel chaos and was not stood down until after Christmas.

The anti-drone equipment can detect and jam communications between a drone and its operator and was deployed on a roof at Gatwick.

The system, which is said to have a range of several miles, uses four radars to give 360-degree detection in order to identify and track targets.

Following the end to the initial drone-related disturbance at Gatwick, Security Minister Ben Wallace said: "I can say that we are able to now deploy detection systems throughout the UK to combat this threat."

Earlier today, the British government announced a package of measures designed to give police extra powers to combat drones.

The exclusion zone around airports will be extended to approximately a 5km-radius, with additional extensions from runway ends.